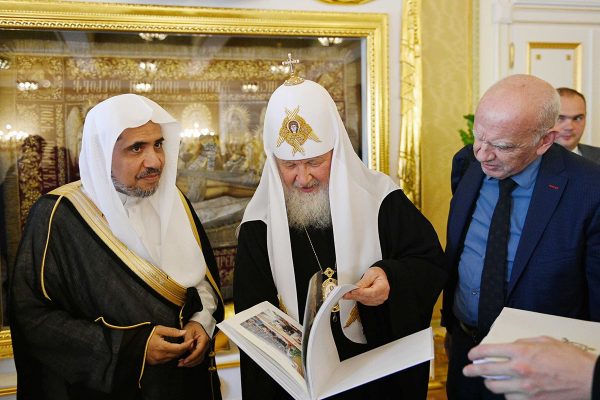 On July 23, 2019, His Holiness Patriarch Kirill of Moscow and All Russia met with the Secretary General of the Islamic World League Muhammad bin Abdul Karim Issa at the patriarchal and synodal residence in St. Daniel Monastery in Moscow.

Taking part in the meeting were also Mr. Raid Halid Krimli, ambassador of the Kingdom of Saudi Arabia to Russia; Mr Turko Daudov, advisor to the head of the Republic of Chechnya and to the Secretary General of the Islamic World League in Russia; Mr. Muhammad Said Al Gamdi, Secretary General deputy for public issues; and Mr. Ahmad Faisal El-Youssef, director of the Islamic World League representation in Moscow.

Welcoming the guest, the Primate of the Russian Orthodox Church noted, ‘You are carrying out a great educational work, which commands special respect. You are taking care of vulnerable people who need aid and support in Asia and especially in Africa. Therefore, thanks also to your contribution to the work of the Islamic World League, it has gained authority not only in the world of Islam but also become renowned and respected for its work in the Christian community as well’.

His Holiness pointed out that the Russian Orthodox Church ‘has a broad network of joint actions and contacts with representatives of the Islamic world’.

‘For us, contacts with Moslems are very natural because for one thousand years we have lived together with Moslems in our country; we are brothers and fellow citizens who have never had conflicts or discords between them’, His Holiness testified, ‘And since Orthodox Christians and Moslems belong to the Eastern culture, the relationships of our communities are always simple and sincere’.

Patriarch Kirill said that this year, a representative of the Russian Orthodox Church visited Saudi Arabia at the invitation of the Secretary General of the Islamic World League. ‘We very much missed relations with Saudi Arabia. For this reason, I am very glad that you have come and was very glad that our representative, Hieromonk Gregory (Matrusov), was given a very good welcome’.

His Holiness also congratulated Mr. Muhammad Abdel Karim Al-Issa on having been awarded the rank of Doctor Emeritus by the Russian Academy of Sciences Institute of Oriental Studies. ‘This rank’ he said, ‘is very much respected as it points to the academic community’s recognition of your work. Along with the recognition of your work as a scholar, it is also an expression of gratitude for your work as a man who serves the cause of peace and justice’.

Patriarch Kirill also mentioned the problem of extremism and terrorist in today’s world, stressing the importance of uniting the efforts of Christians and Moslems in opposing violence and extremism covered up by ‘Islamic ideas’.

‘Extremism and terrorism have no national face, and it would be wrong to associate them only with the Moslem community. Terrorists are those who can declare their affiliation with a particular religion, but essentially they are those who are outside any religion because their terrorist actions are contrary to the Divine law’. His Holiness stressed.

‘The Russian Orthodox Church is participating in many programs for humanitarian aid to those in the Middle East who are suffering from armed conflicts and standing in need of support. In the first place, it is Syria in which there is an internal conflict making suffer the peaceful population, both Christians and Moslems’, His Holiness stated.

He also said that the Russian Orthodox Church continued giving all possible support to the Middle East population regardless of their faith. He cited the work of the Interreligious Working Group to give humanitarian aid to the Syrian people; it was established by the Presidential Council for Cooperation of Religious Associations, which includes both Orthodox Christians and Moslems in Russia.

‘I would like to point to the positive role of the Islamic World League, which, in recent years, have made considerable efforts to educate the Moslem youth in the spirit of peacefulness and solidarity’, he said.

His Holiness also mentioned the major international Moslem conference that took place last May in Mecca and was attended by over 1000 scholars from 139 countries. ‘We have read the statement of that conference and evaluated it very positively. Since the leading role in the organization and conduct of the conference belonged to the Islamic World League and personally to you, I would like to point to its positive outcome’.

‘The Russian Orthodox Church is glad to maintain cooperation and to engage in peacemaking and social initiatives of the Islamic World League and I hope that after our meeting the relations between the Russian Orthodox Church and the Islamic World League will become even more intensive and aimed at achieving goals common for our religions, such as the establishment of peace and justice both in the Middle East and the world’, His Holiness said summering his speech.

On his part, the Secretary General of the Islamic World League said that Patriarch Kirill was known in the world of Islam for his social and humanitarian actions aimed to establish justice and peace throughout the world. The Islamic World League, he said, highly appreciated the Russian Orthodox Church’s action to render humanitarian aid. It also gave a high value to the moral and ethical positions expressed by the Russian Church and to His Holiness’s statements aimed at establishing peace and accord between representatives and followers of various religions. Especially notable, he said, were His Holiness’s continuous assertions that terrorism has no religious or national slant and face and that terrorism has no place in any religion.

The head of the Islamic World League also stressed the importance of the work carried out by the Russian Orthodox Church to preserve peace and accord between adherents of various religions in Russia.

‘Immense efforts you have made as Primate of the Russian Orthodox Church deserve everybody’s great gratitude. There is no doubt that your meeting with the head of the Roman Catholic Church has a tremendous significance for followers of world religions throughout the world. We, as the Islamic World League, will maintain cooperation with the Russian Church so that there could be no clashes, quarrels or wars between Orthodox Christians and Moslems, and we highly appreciate and promote it’, Mr. Muhammad Abdel Karim Al-Issa stressed.

He also pointed to the shared positions of the participants in the dialogue in strengthening international, inter-ethnic and interreligious accord in the world. ‘We as representatives of the Islamic World League are ready to make our contribution together with the Russian Orthodox Church. We highly appreciate the work of the Russian Orthodox Church to struggle against the instigation of national and religious strife and hatred among people, and we are in solidarity with you in this sphere’, he stated.

The Secretary General emphasized the readiness to maintain cooperation with the Russian Orthodox Church and to make together social and humanitarian efforts for establishing peace and accord between followers of various religions and for continuing dialogue for combating violence and extremism, overcoming strife between people, and solving problems of human rights and settling other important social issues.

In the end of the meeting, a cooperation agreement was signed by the Moscow Patriarchate Department for External Church Relations and the Islamic World League.