On March 15, 2013, His Holiness Patriarch Kirill of Moscow and All Russia met with Palestine’s President Mahmoud Abbas at his residence in the St. Daniel Monastery.

Participating in the meeting from the Russian Orthodox Church were also Metropolitan Hilarion of Volokolamsk, head of the Moscow Patriarchate’s department for external church relations, Archbishop Mark of Yegoryevsk, head of the Moscow Patriarchate’s office for institutions abroad, Bishop Tikhon of Podolsk, chairman of the financial and economic department, Hegumen Philaret (Bulekov), a DECR vice-chairman, Archpriest Sergiy Zvonarev, DECR secretary for the far-abroad countries, and M. Palacio, DECR secretariat for the far-abroad countries. 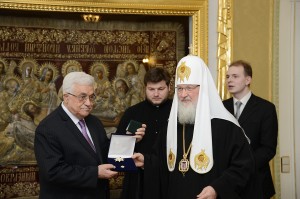 Photo by the Patriarchal Press Service

President Mahmoud Abbas was accompanied by Palestine’s Ambassador to Russia Faed Mustafa, Foreign Minister Riyad al-Malki and a number of other high-ranking officials.

The Russian Foreign Ministry was represented by A. Rudakov, representative of the Russian Federation to the Palestinian National Administration.

Addressing the President of Palestine, His Holiness said, ‘A very important event has taken place since our last meeting: on November 29, 2012, the UN granted Palestine the status of observer state. I am delighted to ascertain that you have made a great progress on the international arena and to congratulate you on it’.

Speaking about the situation in the Middle East, especially in Syria, His Holiness described it as a humanitarian disaster. ‘Tens and hundreds of people die every day. Thousands of Syrian citizens have lost their jobs; many have fled Syria. We know about a great number of refugees who leave for neighbouring countries and to Russia. It is certainly impossible to accept this state of affairs’, he said, stressing that if the stress continues to be made on the use of force in this domestic Syrian conflict, it can entail terrible consequences.

Patriarch Kirill said it was his profound conviction that the hostilities in Syria should be immediately stopped; otherwise the whole country can be destroyed. ‘All those who are sitting now at this table, both on your and our side, remember Syria as a thriving country. Nowadays, what television shows reminds us of pictures of the Stalingrad Battle. Therefore it is necessary to stop the hostilities as soon as possible and to begin a negotiation process. I would like to say once again that what is at stake is the survival of a nation and culture including historical monuments’, he added.

He also spoke about the Christian presence in the Middle East, stating that Christians are leaving even the countries in which there are no hostilities. ‘In some sense, it is a historical civilizational catastrophe. Christianity originated in the Middle East. It is our cradle and the beginning of Christian culture’, he said.

His Holiness spoke highly of the contribution made by the Palestinian leaders in creating conditions for Christian life in Palestine, where the equal rights of Muslims and Christians are not only fixed legally but also implemented in practice. ‘In Palestine there are no threats to the life and welfare of Christians, and in this sense it stands out as compared to other countries in the Middle East. However, in face of external circumstances, Christians are leaving your country as well’, Patriarch Kirill said and asked Mr. Abbas to do all that is possible to prevent the outflow of the Christian population from at least the Palestinian state, so that peaceful and mutually respectful cooperation between Muslims and Christians could continue in Palestine.

Speaking about the Palestinian-Israeli problem, Patriarch Kirill emphasized that ‘the Russian Church has taken a firm peace stand. We stand for a peaceful and just settlement of this problem and we are ready to support your initiatives and the initiatives of the other side aimed at achieving peace and justice in this region of the globe, so special for the believer, both Christian, Muslim and Jew’.

‘For us, this issue becomes even more important because of an ever growing inflow of pilgrims coming to the Holy Land from Russia, Ukraine, Belarus and other countries under the pastoral care of the Russian Orthodox Church’, His Holiness said and expressed hope that in the future the faithful of the Moscow Patriarchate will continue to be given a warm welcome in Palestine.

‘I and the all the Palestine people remember with pleasure your visit to Bethlehem, which brought a great joy to the Christian and Muslim population. We view Christians not as a minority but as a foundation of our state’, Mr. Abbas said.

He also said that he shared the concern expressed by the Primate of the Russian Orthodox Church over the situation in Syria. ‘The situation in the country has not stabilized; on the contrary, it has become worse. The only way of settling the Syrian crisis is a peace decision which will allow all the representatives of the Syrian people to sit down at the negotiation table and to find a way out which would satisfy all the sections of the society. The continuation of hostilities will not benefit anyone. We are ready to help the Syrian people to find a way out of the present crisis’, Mr. Abbas said.