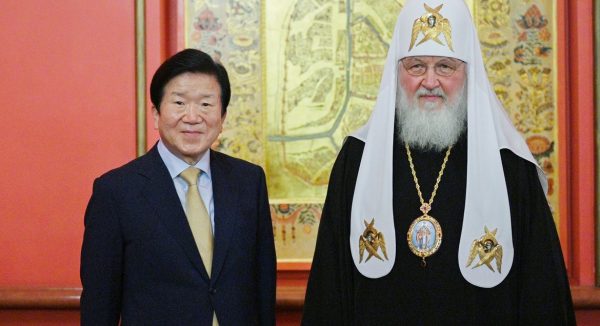 His Holiness Kirill, Patriarch of Moscow and All Russia, was officially invited to visit South Korea.

The official invitation to the Primate of the Russian Orthodox Church was handed over by the Speaker of the National Assembly of the Republic of Korea, Park Byeong-seug, at a meeting held in the Red Hall of the Cathedral of Christ the Savior on May 22, reports the website of the Department for External Church Relations of the Moscow Patriarchate.

“I know that the Russian Orthodox Church is the spiritual foundation of the Russian people and has been making a great contribution to ensuring its unity for over a thousand years. The Church gives people of Russia consolation, spiritual security and stability, especially in the current difficult situation caused by the pandemic,” said the speaker of the South Korean parliament at the meeting.

Park Byeong-seug made a special mention of the peacekeeping position of the Russian Orthodox Church, including in matters of ensuring peace on the Korean Peninsula and the unification of the people of Korea, as well as its participation in interreligious dialogues.

For his part, His Holiness Patriarch Kirill fondly recalled his visit to Korea in 1990 during the Justice, Peace and Integrity of Creation conference.

“This was my first experience of communicating with Korea, and I keep the warmest memories of this experience,” noted the Patriarch.

Patriarch Kirill also recalled that in 2006 he visited North Korea, where he consecrated the first Orthodox church.

During the meeting, the Primate of the Russian Church conveyed his respect and sympathy for the entire Korean people – “a very hardworking, well-organized people who have achieved great success in the economy, in the political and cultural life of their country.”