Patriarch Kirill: Parish Life Must Be Constructed Along with Churches 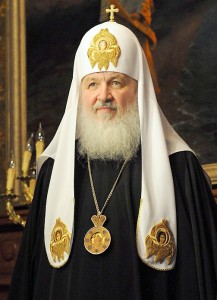 On January 3, 2014, following the Divine Liturgy in the Patriarchal Dormition Cathedral in the Moscow Kremlin, a trapeza [fraternal meal] was held, during which Patriarch Kirill of Moscow and All Russia addressed those present.

“Moscow is the capital of our Fatherland, the First-Throned city of all Rus’. Life in our cities, and in Rus’ in general, depends upon what takes place in Mosocw,” His Holiness stated in part, noting that in recent years nearly eighty new parishes had appeared in Moscow. “But some of these parishes are just getting on their feet,” His Holiness added.

“You might serve in a small unfinished room, sometimes in just a caravan or construction trailer — but this is irrelevant: the grace of God is as equally effective in the Dormition Cathedral as it is in a construction trailer, if the Holy Eucharist is celebrated there,” stated the Primate of the Russian Orthodox Church.

At the same time, according to His Holiness, parishes must not only be places for services, but must also develop systems of parish ministry.

“The parish community should be formed during the process of constructing churches,” His Holiness emphasized. “According to Program-200, we will continue to develop parishes, creating parish life and building churches simultaneously.”

Addressing the members of the Diocesan Council of Moscow, who had concelebrated with him at Liturgy at the Dormition Cathedral and were present at the trapeza, Patriarch Kirill noted that the development of parish life in the newly-built churches in the capital must be the Diocesan Council’s main objective.