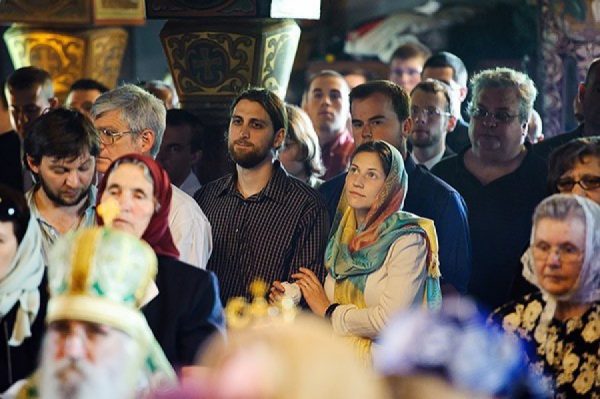 A large part of the problem with some Orthodox parishes (at least of my acquaintance) is not lack of money or lack of a nice building (nice as money and good buildings are), but the fact that they have not been built upon a proper foundation. The Scriptures have lots to say about the value of a good foundation, and the Lord teaches us that if the foundation has not been properly laid, the whole edifice built upon it is in danger of being swept away (Matthew 7:24-27), if not literally, then certainly spiritually.

I know of a number of parishes which have been thus swept away—not that they no longer exist as parishes, but that they no longer exist as true temples of God. Some have become spiritually toxic, and are more accurately described as synagogues of Satan (compare Revelation 2:9). To be a truly Orthodox temple of God, the community must first have in place a solid foundation. And as St. Paul reminds us, “no other foundation can anyone lay than that which is laid, which is Jesus Christ” (1 Corinthians 3:11). One can try to lay other foundations, setting in place the wood, hay, and straw foundations of ego and the cult of personality. But Jesus Christ is the only real and lasting foundation, either for a parish or an individual’s life. How can one build on this foundation to become a truly Orthodox community? I suggest five ways.

First of all, the priest of the parish must dedicate himself to his people and to washing their feet, as the Lord Himself gave both example and command (John 13:1f). Too often young priests assume they are entitled to respect simply because they wear a cassock. It is true that all persons should be treated with respect and courtesy, but it is also true that respect must be earned. The priest’s ordination does not entitle him to respect so much as it gives him the opportunity among his people to earn it. And he earns it by selflessly serving them, counselling them, loving them, weeping with them, sharing their burdens, and being accessible to them at all times. By doing so he earns credibility, so that he will be cut some slack when he errs or makes unpopular decisions. But it takes time to earn such credibility, as some young clergy have learned to their cost.

Secondly, the priest must preach Jesus Christ, and nothing else. What else, you may ask, would a priest preach? Alas, there is a long list of possible alternatives. He might preach simple moralism (“Let us be loving and nice”); he might preach the glories of his ethnic heritage. I remember a very nice Greek bishop enthusing at a church’s dedication about “our beautiful religion”, by which he almost certainly meant his beautiful Greek religion. Better to enthuse about our beautiful Saviour, for to enthuse about our religion is another way of enthusing about ourselves.

And one might preach Orthodoxy—the subtlest of all snares. That is, one might describe the glories of the Orthodox Faith, its sound doctrines, its wonderful sacraments, its glorious icons—and how Orthodoxy is a superior faith to all the other faiths on the market. In other words, one might preach about our beautiful religion, shorn of its ethnic components, which is still a way of preaching ourselves. The apostles preached Jesus Christ as Lord, God, and Saviour, and how one could live in obedience to Him and become transformed. Orthodoxy is not the content of our Faith, but the mode of its reception. We serve the Christ preached by the Orthodox Church, not the Christ preached by (say) the Mormons. But Christ remains the content of our preaching.

Thirdly, the parish council must be united in standing behind and supporting their priest. Too often parish councils become the sites of a tug of war, a struggle for power, with the priest pulling in one direction and his council pulling in the other. In this struggle, no one wins, especially not the supposed winner. The council must have the same goal as the priest—i.e. not to collect and retain power, but to serve Christ and His flock, and they must support their priest because he is in the forefront of fulfilling this common goal. He is not their employee, but their papa, and should be treated as such.

Fourthly, the community must make love their aim—that is, the creation of genuine community. This is impossible to do without eating together and working together, and to this end all Sunday Liturgies must have a time of eating appended to it so that the people can eat, talk, and share together. All the Pauline epistles presuppose the presence of a close community, and without it Christianity remains a mere cultic experience, lacking its crucial social component.

One church I knew of always had a meal afterward, but they charged for the food, so that the social time functioned as a fundraiser. Not surprisingly many skipped this meal and left right after the Liturgy, especially those with large families who could not afford to pay $10 a head for perogies and borscht. When I suggested that they have a free pot-luck meal instead, they were aghast at the possible loss to their budget. They valued income over the creation of community—and over church growth. They have their reward.

Finally, the community must be eschatologically oriented. That is, they must regard themselves not primarily as citizens of this world or as Americans or Canadians or as citizens of any other country, but as citizens of the Kingdom. Patriotism is wonderful, but the good must not be allowed to become the enemy of the best, and the Church stands under the Cross, not under any national flag. To make the flag paramount is idolatry. Through his preaching the priest must encourage his flock to see themselves as sojourners in this age, with their eyes fixed on the horizon to behold the blessed hope of the Second Coming with the cry of “Maranatha!” in their hearts.

Living this out consistently will mean that the society around them will increasingly regard them as aliens, as unwelcome intruders, and as disturbers of the secular status quo. We all know where the front line of this battle is being drawn, and we must not flinch or compromise. Our Lord’s words to the apostles, “If you were of the world, the world would love its own, but because you are not of the world, but I chose you out of the world, therefore the world hates you” (John 15:18-19) have lost none of their relevance. The priest must preach and the people must accept that to become an Orthodox Christian is to leave one moral universe and to enter a different one. And they must read the fine print before making this decision—that of inevitable conflict with the world and of possible persecution.

These are the principles and the foundation upon which new missions should be built and already established churches should conform. Conforming to them does not require changes in the congregation’s constitution and bylaws, but only humility of heart and a desire to grow. In the end it comes down to vision: does one have a vision of one’s church as a place of counter-cultural transforming truth and a laboratory of love, or simply as a place to go to in order to fulfil one’s spiritual needs? If the latter, then you should know that God cares less than nothing about your spiritual needs. He cares about you and your transformation. And that transformation is only possible if you catch the vision of your church as a place of uncomfortable truth, and of healing love.

It is, I suppose, a sign of how strange and ubiquitous the internet is that I often receive…

If one wants to grow and mature in Christ, as well as adhering faithfully to one’s daily rule…

Ahead of the Nativity Fast, it is a good time to talk…

How To Prove Your Love To…

Today we hear about a certain man, a lawyer who put Jesus…

Most viewed articles
You Are Not Alone – And Neither Is God179
I Cannot Change God’s Will. Does It Mean that Prayer is Useless?161
His Grace Bishop Alexis Returns from Visit to Russia142
Pastoral Message from Metropolitan Tikhon for Thanksgiving Day 202187
How To Prove Your Love To God77
Metropolitan Anthony (Pakanich): Unworthy Behavior of the Clergy and Believers Is What Pushes People Away from the Church42
Sunday of the Samaritan Woman1
Most popular authors
Archpriest Stephen Freeman179
Fr. Eugene Murzin159
Pravmir.com team141
Metropolitan Tikhon of All America and Canada87
Fr. James Guirguis76
Metropolitan Anthony (Pakanich)41