On July 22, 2012, His Holiness Patriarch Kirill of Moscow and All Russia met with Italian Prime Minister Mario Monti at the official Patriarchal and Synodal Residence at the St. Daniel Monastery in Moscow. Mr Monti is on his first official visit to the Russian Federation. 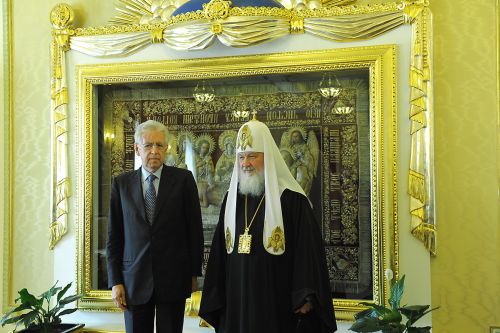 Welcoming Mr Mario Monti and his party, Patriarch Kirill said that the Russian-Italian relations were always characterised by a high degree of confidence and mutual understanding. ‘And a very important ground and reason for this is our common belonging to the system of Christian values on which the legislation and culture of our countries were founded. I think these sources of our culture, social thought and philosophy have formed to a large extent the make-up of both the Russian and the Italian’, His Holiness stressed.

Patriarch Kirill noted that the Russian Orthodox Church fruitfully developed her relations with the Roman Catholic Church in Italy; there were continued exchanges of delegations. Recently the flow of Russian pilgrims to Italy has increased. ‘Visiting common Christian shrines in Italy, Orthodox Russians have an opportunity to come in touch with the spirituality of the Italian people and their religious culture and to have a heartfelt feel of each other. Perhaps, Italy is the second largest pilgrim host after the Holy Land’, the Primate of the Russian Church said.

He also said that the Moscow Patriarchate closely followed the present developments in Europe. Addressing the Italian prime minister, he said, ‘We are concerned for the economic situation which has developed in your country. We hope that you as a renowned economist now the head of the Italian Government will do all that is possible to relieve the situation of your people and to improve the economic situation’.

According to Patriarch Kirill, religious people had their own view of the crisis including the economic one. ‘It is our conviction that along with purely technical reasons which lead to a crisis there are some fundamental causes, and today we are concerned most of all for the spiritual and moral dimension of the crisis’, he said, adding that in the last two years, the Russian Church together with the Cardinal Paul Poupard’s Foundation organized colloquiums in Moscow on the theme ‘Ethics and Business’. ‘I had an opportunity to meet with representatives of Italian financial circles, banks and businesses. I am pleased to note the closeness and even similarity of the positions held on the most important issues including those related to the moral dimension of today’s economic crisis’, His Holiness said.

He also pointed out that there is a great number of expatriates from the countries in the canonical territory of the Moscow Patriarchate, Russians, Ukrainians, Byelorussians and Moldavians, who reside or live in Italy today, and the Russian Church is engaged in organizing their church life. ‘As of today, there are 55 Orthodox parishes in Italy, which are under the jurisdiction of the Moscow Patriarchate. Our church administrative structure has been recognized and officially registered with the Italian state’, Patriarch Kirill said, expressing hope that the administrative structure of the Russian Church in Italy would occupy an appropriate place among other religious organizations with which the Italian state cooperates. ‘The matter is that there are thousands and thousands of people who are parishioners at our parishes and who need our pastoral care’, His Holiness stressed.

He also stated that in recent years there was a considerable improvement in relations with the Roman Catholic Church, saying, ‘In fact, we hold the same views on many issues, first of all, on pastoral matters relating to the life of the modern man’. In Patriarch Kirill’s view, this area of the bilateral dialogue is the most important one, since the topics under discussion have a direct bearing on people’s life: ‘It does not mean that traditional theological problems we have inherited from the past are of no importance; it means that our attention is directed to pressing problems affecting the life of the modern Christian, both the Orthodox and the Catholic’.

‘Among the topics we consider is the spiritual crisis linked with the erosion of traditional moral values’, Patriarch Kirill said. The Russian Orthodox Church and the Roman Catholic Church together have advocated the Christian position in public space. He recalled that among vivid examples of this cooperation was the case of ‘Lautsi vs. Italy’ concerning the presence of crucifixes in Italian schools. The Russian Orthodox Church and the Russian State took a most active part in the reconsideration of the original decision made by the European Court of Human Rights to ban crucifixes from schools. ‘We are very glad that the Great Chamber of the European Court in Strasbourg dismissed the appeal of Ms Lautsi, which touched on the religious feelings of a great number of people’, Patriarch Kirill said.