Patriarch Kirill: “Society and Government Die When People Start Pursuing Self-Interest at the Expense of the Commonweal” 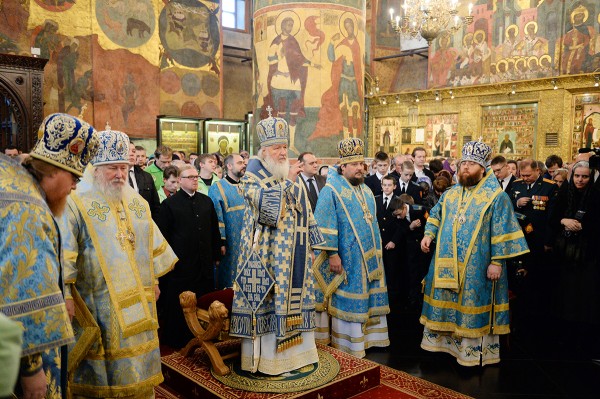 On Unity Day we remember one of the most tragic periods in the history of our Fatherland, when our country was as good as on the verge of extinction from the world’s map: facing imminent catastrophe, it was saved by God’s Providence and the people’s fidelity.

We exist as a united people only thanks to people of faith and honor who preserved independence and the autonomy of the government at the time. They deserve our grateful memory.

Today we remember overcoming the Time of Troubles, bloody civil strife and fratricide, rather than the victory over foreign enemies or the expulsion of invaders from our Fatherland. Are the “legends as old as the hills” important to us today? Are the tragic events of that time relevant to our present life?

I am convinced that the lessons of those years are still crucial and will be so forever, because it has not been the last Time of Troubles in the history of Russia. We should understand the reasons for the strife and how it was overcome. It is not a question of academic interest or a matter of scientific research, but a question of a safe present and future for our society, which concerns each and every one of us.

Currently, everybody is worried about the Ebola virus: the epidemic that has already taken the lives of many people in the countries of Africa. Many scientists around the world are trying to understand the way this disease spreads and how to fight against it, how to help the sick, and what preventive measures to employ in order to protect the healthy.

The Time of Troubles is an example of a social illness when, instead of people’s bodies, their souls were injured. It is crucial for us to understand how it appeared and how it was overcome. We could look for political or economical causes and, probably, we could find them.

But the true sources of this disaster are primarily moral. It is what can be called the weakening of social material and ties of community and trust, which bond people in one group. This is what social studies call the atomization of society: when traditional social relations disintegrate, when everyone leads their lives individually and puts their personal interests first at the expense of the interests of society and government, and when individuality wins over community.

Many of those who had what we might now call autocratic resources used them in order to fulfill their wishes and ambition at the cost of the country and its people. Many people were thinking about which side to choose, abdicating their responsibilities, and looking for larger profit for themselves. As always happens in such cases, some people appeared who used the mutual tragedy for their own benefaction and prominence. Groups of bandits filled the country, robbing, bullying, and killing their countrymen.

How, then, was the country saved? It was saved by the efforts of the people’s will and the movement formed in the depth of national life. But where did the movement itself come from, and what inspired people to forget their personal interests and unite in order to save the Motherland? It was loyalty to the Motherland and true faith, which had given them the comprehension of community and duty and the understanding that, without national solidarity, society is destined for disintegration and destruction.

Thus, society and government die when people start pursuing their personal or occupational interests at the expense of the commonweal; but it gets saved when there are enough people who are ready to work and make sacrifices for the country.

But how should we avoid anything of this kind in the future? The health of a social organism does not get ruined in one day, just as it is not born overnight. I am convinced that all people – either representatives of the authorities or ordinary citizens – are responsible for creating and maintaining the relations of trust and solidarity that are supposed to exist in society.

“Look not every man on his own things, but every man also on the things of others” [Phil.2:4], the Apostle Paul said. Willingness to serve one’s neighbor and society as a whole is not merely a moral imperative, but the essential condition of the survival of society. Yes, it is much easier to say: “I will care about my own interests and perhaps about the interests of my family. I do not care about other things.” But this approach was in fact what led to the Time of Troubles.

We should make a moral choice: turning our attention from ourselves to our neighbors, taking courage to serve others now and making sacrifices. Then strife will not come, during which people sacrifice everything.

The excellent example of selfless service to the Fatherland and its people was given by the Tsars and Great Princes of the Rurikid Dynasty, which were remembered today during a traditional exhibition entitled “Orthodox Rus’ on Unity Day.” They were strengthened by their faith and a righteous life. Thanks to their efforts, Russian statism was formed and the Russian lands were united: Great Rus’ was formed, which went through joys and various misfortunes, endured the difficulties of the invasion of foreign enemies, and preserved its freedom, history, faith, and life perfectly.

May the Lord grant us the wisdom and strength to preserve the spiritual inheritance of our ancestors and to send us the courage to build a society that would be united and tied with love, mutual fidelity, duty, and trust: a society that no viruses of strife could ever defeat.

Patriarch of Moscow and All Russia.

Most viewed articles
Growing Cold in Faith after a Few Years in Church: Is This Normal?187
How to Survive in Modern City. 8 Essential Conditions125
Russian Church to Help Provide Lebanon with Vaccines Against Coronavirus88
Bishop Irenei Addresses a Symposium on “The Mother of God in Our Lives” in Los Angeles88
It’s All About the Resurrection – Reflecting on the Season85
Over 20 Thousand People Pray for Discrimination of the Ukrainian Orthodox Church60
Vandals Attack Serbian Church in Croatia53
Appeal for Help from the Church of the Mother of God in Austria51
Volunteers from St George Greek Orthodox Church in Rose Bay gather to cook for the homeless47
We’re Being Robbed1
Most popular authors
Pravmir.com team289
Archpriest Nikolai Markovsky187
Fr. Andrei Gavrilenko125
Archpriest Gabriel Rochelle85
Archpriest Georgy Kharlov51
John Voutos47
Archpriest Stephen Freeman1