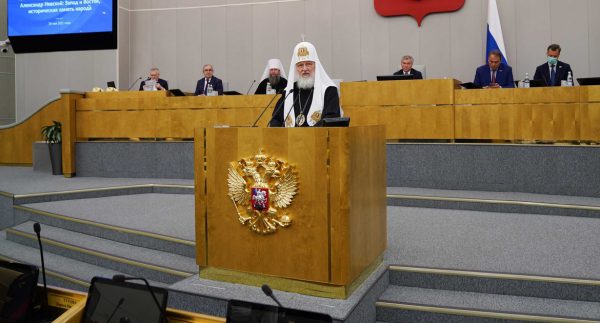 On May 18, 2021, speaking in the State Duma of Russia at the opening of the IX Parliamentary Meetings organized as part of the XXIX International Educational Readings, His Holiness Kirill, Patriarch of Moscow and All Russia, spoke about five most important topics that are of concern to the Church and Russian society as a whole.

Development of a Voluntary Work System

The Primate of the Russian Orthodox Church noted that at the time of the coronavirus pandemic, the volunteer movement, both church and national, has manifested itself even stronger and brighter than ever before.

“Thousands of our brothers and sisters did not stand aside, and became volunteers. Among them were more than seven thousand Orthodox volunteers who purchased and distributed food, provided other assistance, both in Russia and abroad,” said His Holiness Patriarch Kirill.

He said that the Church has opened more than 100 hot lines for people in need, new church aid centers, and starting from June 2020, more than 50 thousand people have received concrete assistance through church humanitarian centers.

In this regard, the Patriarch expressed his conviction that “voluntary work should not remain just a fire engine for emergencies, but should become the norm of public life.”

“Volunteers are, in my opinion, the vanguard of civil society. They are people capable of doing real deeds to show adherence to moral ideals. They do not so much declare their political preferences, as they really are engaged in work that is so necessary for the weak, sick, and needy,” His Holiness Patriarch Kirill stressed. 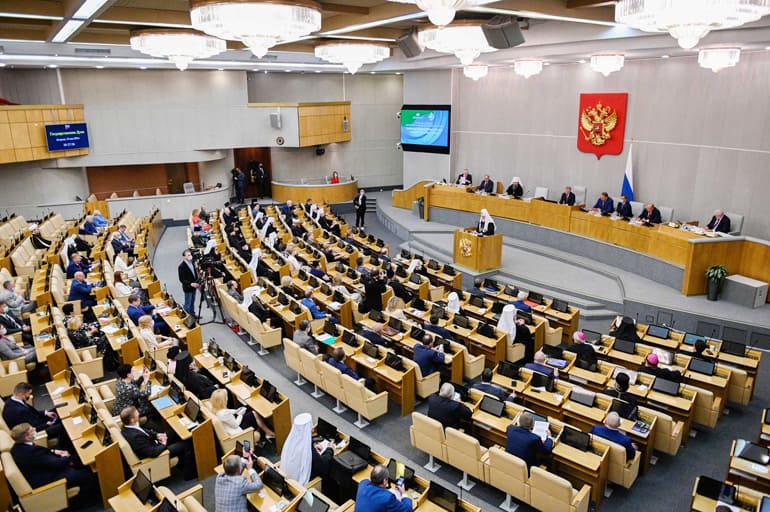 Poverty Alleviation and Support for the Poor

Patriarch Kirill believes that one of the most important tasks for the state today is the fight against poverty and support of the poor.

“I believe that the introduction of a progressive income tax scale in Russia, which began to operate on January 1 of this year, is a good step in this direction.”

At the same time, Patriarch Kirill considers it necessary “to develop new measures as well that can reduce the gap between the incomes of the poor and wealthy citizens.”

Calling for the continuation of legislation work in this area, the Patriarch recalled that “the gap between rich and poor … introduces pernicious divisions in society and undermines people’s trust in the authorities and in each other.” 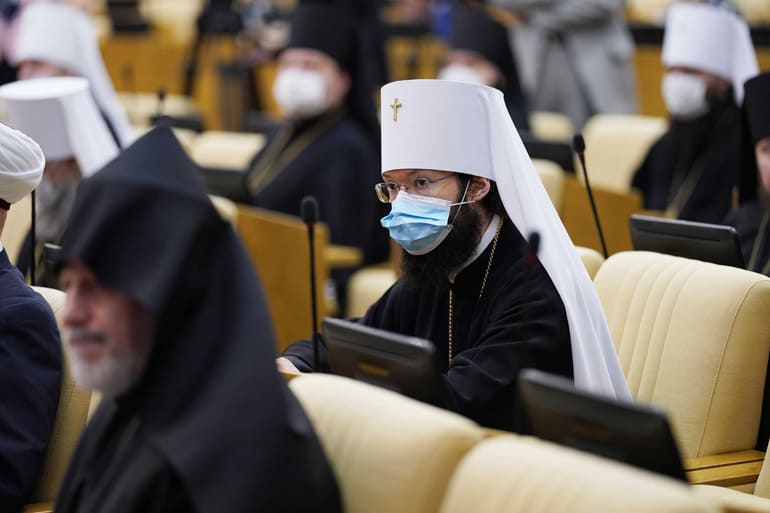 The issue of the development of technologies for personal control and in particular digitalization is also very important said His Holiness Patriarch Kirill.

The Primate of the ROC emphasized that “any technology … that radically changes people’s lives, including total digitalization, undoubtedly requires public discussion.”

“The digitalization of public administration cannot turn power into a soulless technical algorithm. The final decision on any case, starting with a simple technical state service, should always remain with a living person, and not with a high-tech machine,” the Patriarch noted in this regard.

Pointing to the fact that technologies are developing faster and more and more people are starting to use them, His Holiness Patriarch Kirill emphasized that “we need to take into account the interests and rights of those of our fellow citizens who refuse to use any electronic systems.”

“It is important to prevent discrimination arising from the principle “if you don’t want to use new technology, a vital government service will not be provided”. Such an approach will inevitably lead to the disconnection of a person from the opportunity to conduct professional activities or receive material benefits, if he or she does not fully agree with the terms of their provision,” said Patriarch Kirill.

In this regard, he asked lawmakers “to pay attention to the expressed concerns,” emphasizing that the concern of the Church here “is not specifically religiously motivated, but lies in the field of human rights.” 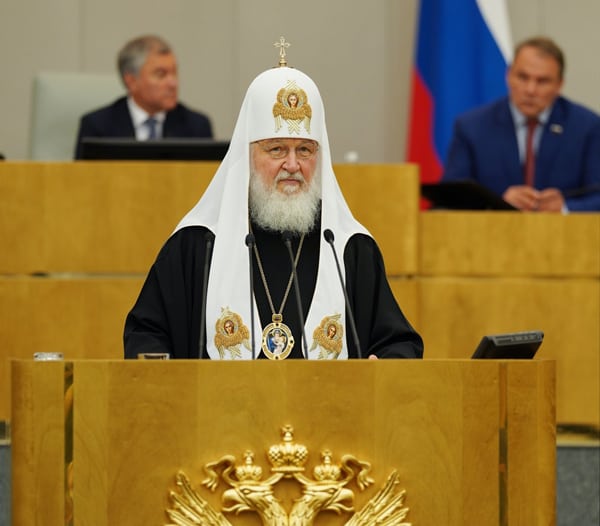 Once again, His Holiness Patriarch Kirill spoke on the topic of abortion and the protection of the lives of unborn children.

The Primate of the Russian Church cited the statistics of the World Health Organization (WHO), according to which 40-50 million of legal abortions are performed annually in the world, excluding illegal ones. In Russia, His Holiness Patriarch Kirill added, the population fell by more than half a million people in 2020 alone “and affordable abortions made a terrible contribution to this situation.”

“Abortion, unfortunately, is still in the status of “free medical care” – I put these words in quotation marks. We will never agree with this. No less immoral, of course, is the creation of an atmosphere of indifference to pregnant women, who are often forced to have an abortion,” the Patriarch pointed out.

He noted that the Church understands that the problem of abortion cannot be solved at once, but “it is important to at least outline a clear strategy, the goal of which would be a complete refusal of state funding for abortions conducted not for medical reasons.”

In addition, the Primate of the Russian Church stressed that it is also crucial to further develop the system of support for pregnant women, “each of whom must be sure that she is doing a great deed by giving a new life.” 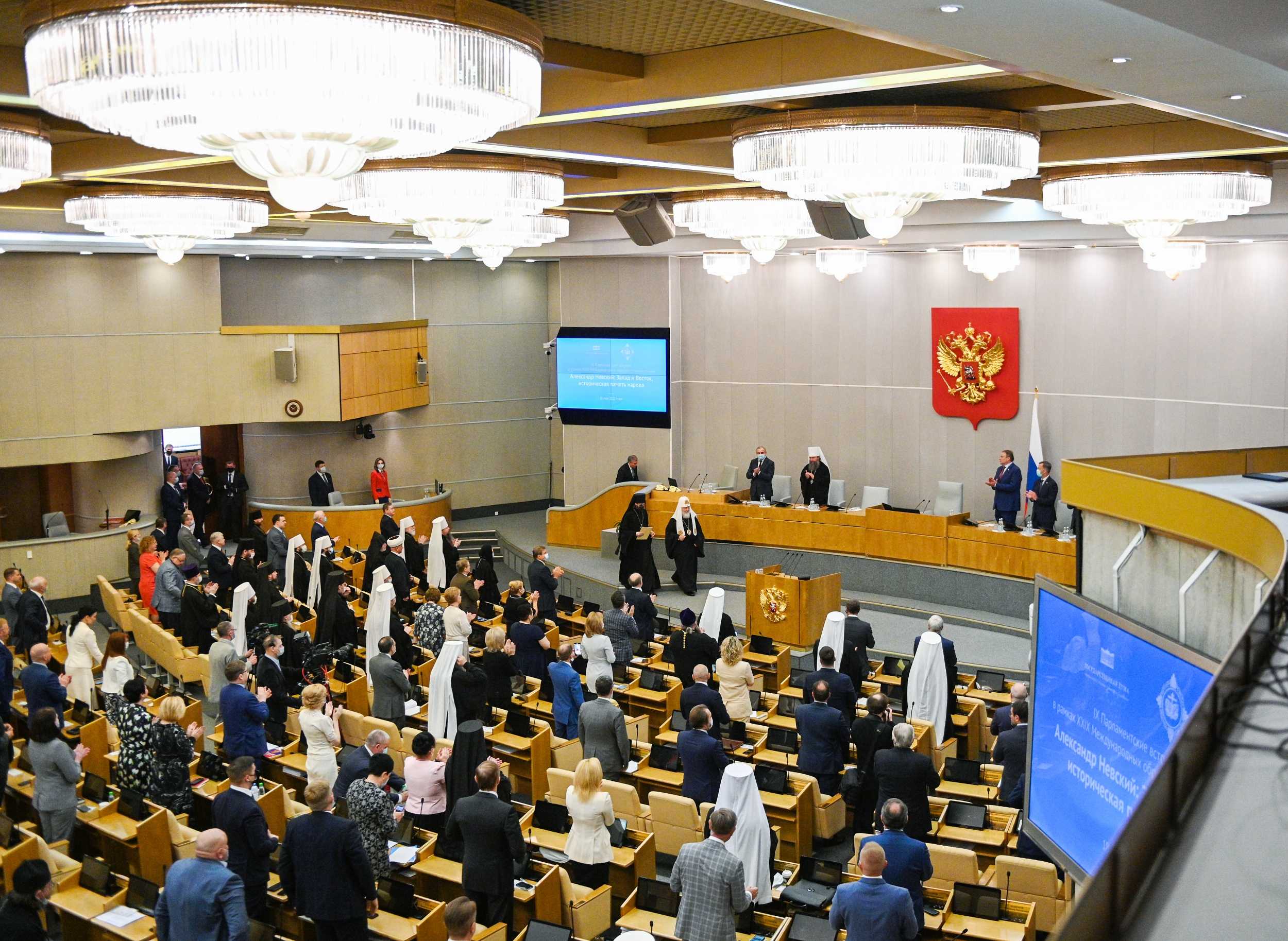 The last important topic Patriarch Kirill spoke about was the protection of the family, in particular the issues of surrogate motherhood, family law, and the status of a large family.

Recalling that “surrogate motherhood itself is not blessed by the Church,” the Primate added that “the more immoral deed is the use of motherhood as “export”.

“It is immoral to sell the parental potential of women abroad when we see a decline in the population of our country,” said His Holiness Patriarch Kirill.

In this regard, the Primate of the Russian Church called on the State Duma “to put a limit on the use of the “service” of surrogate motherhood for foreigners, and also to think about limiting this phenomenon in Russia”, noting that inside the country this phenomenon “destroys family unity, becomes a form of exploitation of women in need”.

Regarding attempts by the state to interfere in the life of the family, His Holiness Patriarch Kirill noted that “attempts to regulate relations between spouses, parents and children by law are extremely dangerous.”

“With good intentions, careless and hasty actions of third parties in family conflicts can lead to the disintegration of families, the aggravation of the problem of social orphanhood, the formation of an unhealthy attitude towards marriage in society as a deliberately temporary union of two narcissistic egoists,” Patriarch Kirill pointed out.

As for the status of a large family, the Patriarch stated that “this topic always receives support, but there is still no law”.

At the same time, he reported that the parental community “has been striving for the development and adoption of a separate law for many years” on a unified approach to material support for large families. In this regard, Patriarch Kirill expressed hope that “this topic will be in the focus of attention of legislators and will receive its solution in the near future”.