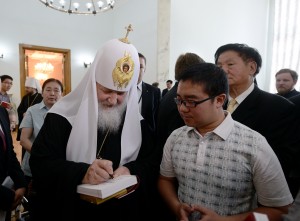 On May 12, 2013, His Holiness Patriarch Kirill of Moscow and All Russia had a talk with Chinese believers at the Russian Embassy in Beijing.

The Primate of the Russian Church had met many of them before when he visited China as chairman of the Moscow Patriarchate’s department for external church relations. He reminded his audience of the words Matron Van Lin Ju had said as far back as 2001 about the need to resume church life.

Addressing the audience, His Holiness said:

‘I meet you, my dear ones, with a special feeling. All of you will be certainly mentioned in the history of the Church. You have performed a feat, having no priests and even sometimes having no hope. But still you have preserved the Orthodox faith. Today we are together witnesses to great changes in the life of China and in the life of Russia. It has led to the fact that for the first time in history, the Patriarch of Moscow and All Russia could pray together with you in the very place where the Albazians used to live, in the territory of the Russian Orthodox Mission. Low bow to you for your efforts, faith and hope which you have preserved in your hearts.

Today, together with the Russian Ambassador A. Denisov, we came up to the cross I consecrated in 2001 when we first met. And I said to Mr Ambassador that since that time the territory has changed. The trees have grown. And then I thought it was not only the trees that have grown but also many things have changed. The church of the Assumption has been restored. There are opportunities now for me to come to pray together with you. Today two Chinese students attend our theological schools, one in St. Petersburg and another in Moscow. They wish to become priests. I hope more people wishing to become priests will come. I very much hope that the parishes of the Chinese Orthodox Church will be granted registration, and at some moment there will be a Chinese bishop, so that the Chinese Orthodox Church could have a full life, could herself ordain her priests, organize places for worship and preach the gospel.

Well, for the present when there are still no such things, the Russian Church and the Patriarch personally are responsible before God and history and all of you for the fate of Chinese Orthodoxy. Therefore, all that happens in the life of Orthodox Chinese is very dear to my heart.

I was very happy today when I saw you all at the service and could pray together with you. I was glad I had an opportunity for lifting up prayers for the Chinese people and those who have been affected by the flood. I believe that the Lord helps those who suffer.

I also prayed for China and Russia and our relations, so that there could always be friendship, mutual aid and support between the two countries. Today, our friendship is of a global importance because the two great countries, China and Russia, are sovereign, independent and have their own position and support each other including in the international arena.

Chinese people keep appearing in Russia. Nowadays there are many of them as people come to work. And in China, too, there are many Russians. There are very intensive exchanges between the two countries. God willing, it all will promote the welfare of our peoples’.

Matron Van Lin Ju, in her turn, shared her memories of the meeting that took place in 2001. ‘I remember very well that on the 1st of November, when over a hundred Chinese came to meet you, it was a cold day; it was snowing. And now, twelve years later, you have come here again, and we are very glad you did. We love China and Russia and, certainly we will preserve our Orthodox faith. Your Holiness, you have come to China; you have met the PRC’ Chairman Xi Jinping. It gives us a great hope for the bright future of Orthodoxy in China’. She quoted China’s Chairman’s words that every Chinese should have a Chinese dream. ‘And my dream as a Chinese Orthodox woman is that Beijing become a place where we could pray, celebrate the Orthodox liturgy, have our own Chinese clergy and normal religious life. It is my Chinese dream’.

Speaking in response, Patriarch Kirill said, ‘You spoke about the Orthodox Chinese dream. Everything begins with a dream and then people try to do something that will make this dream come true. It is called a project. And when a project is realized, the dream is manifested in reality. Your dream seems to reach the stage of project because there are very kind intentions shown by the Chinese authorities. The signs of this good attitude to the Chinese Orthodox Christians are my visit to China and the study of Chinese young people in Moscow. Therefore I believe we have a dream, on one hand, and have already begun creating a project of the bright future for the Chinese Orthodox Church’. His Holiness also noted that he was glad to see representatives of the younger generation of Chinese Orthodox Christians.

The Chinese who spoke at the meeting told that the history of their families was strongly intertwined with the history of Orthodoxy in China. Among them was the elder daughter of the last cleric of the Chinese Autonomous Orthodox Church, Archpriest Alexander De, who was ordained as priest by the head of the 20thRussian Orthodox Mission in China, Archbishop Victor of Beijing and China in the early 1950s. She said how her father felt keenly for the fact that no priest would remain in China after him.

Patriarch Kirill underscored the importance of having Chinese clergy in the country. ‘Then it would be possible to obtain an official registration of the parishes, and they will exist officially. I very much hope that the number of Orthodox clergy will grow, thus normalizing the life of the Chinese Church’, he said.

His Holiness also expressed hope that a group of Chinese Orthodox Christians will soon be able to make a pilgrimage to Russia. ‘I will always be happy to meet with you’, he said.