Patriarch Kirill: The Lord Gave Us the Gift of Forgiveness of Sins 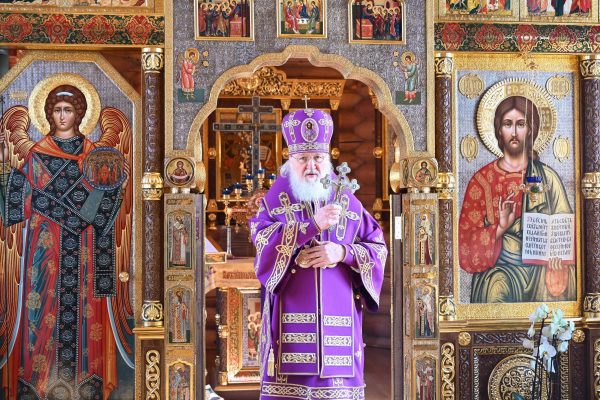 On March 28, 2021, on the 2nd Sunday of Great Lent, the feast day of St. Gregory Palamas, His Holiness Patriarch Kirill of Moscow and All Russia celebrated the Liturgy of St. Basil the Great at St. Alexander Nevsky Skete.

At the end of the Liturgy, the Primate of the Russian Orthodox Church delivered a sermon, in which he spoke on the Sunday’s Gospel reading of the healing of the paralytic (Mark 2: 1-12).

“During Great Lent, one should think in a special way about one’s spiritual life, observe one’s thoughts, words, deeds, and not just observe, but memorize one’s sinful thoughts, words or actions in order to later repent of them and receive this great Divine gift, which the Lord gave His Church, the gift of forgiveness and deliverance from sins.

“Every person, a believer or even an unbeliever, attending church or not attending, realizes, if he has conscience left, that he did something wrong – deceived, stole, offended, not to mention more terrible crimes. Even the criminals also realize that they have committed a crime, but what next? Next the criminal is imprisoned so that he truly realizes the erroneousness of his actions and repents of them – this is how the secular system of correcting crimes works. In most cases, we do not commit such offenses that entail punishment from the state, but this does not mean that the absolute majority of people do not commit sins, that is, crimes against God’s law. Everyone commits sins, whether he realizes it or not, and these sins are piled up in our soul as a huge burden that prevents a person from rising above everyday life and from entering into communion with the Lord. However, there is a special system in the Church that can free a person from a difficult state of guilt and give him forgiveness. This is repentance. Not only the one that takes place during confession in the church, but the one that should precede this confession – the awareness of one’s sins, the realization of one’s unrighteousness. This is the most important thing, because the absolute majority of people consider themselves to be guilty of nothing. If there is no remorse, no control over one’s inner state, then everything seems to be all right. But when we confess before the cross and the Gospel, we remember our sins, at least those that trouble our conscience, and repent. And according to the great gift that the Lord gave to His Church and which He so clearly expressed in the words that healed the paralytic – “Son, your sins are forgiven” – we too receive forgiveness of our sins from the Lord.

“Great Lent is a time of repentance and prayer, and may the Lord help us to focus during these days more than usual on our own inner life. May the Lord help all of us to see our sins, to feel the need to free ourselves from them through the only possible means – through repentance before God, through the Sacrament of Confession, which, by the Divine condescension to us, actually frees us both from sin and from guilt for the committed sin. And may the Lord help us really devote the time of Holy Lent to repentance and prayer. Amen,” the Patriarch concluded.