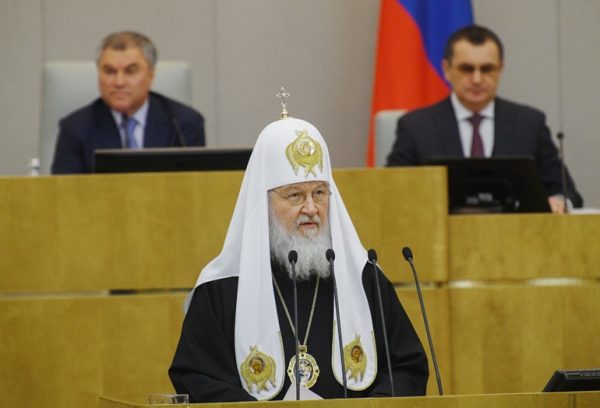 Speaking at the Federation Council during the X Parliamentary Meetings, His Holiness Patriarch Kirill of Moscow and All Russia noted that the Russian Orthodox Church and the Ukrainian Orthodox Church have been constantly praying for peace and calling on people to overcome divisions since 2014.

“I would like to remind you that from the very beginning of the conflict, the Church, both in Ukraine and Russia, has been unceasingly praying for peace and invariably calling on people to overcome divisions,” said the Primate of the Russian Orthodox Church, reports the press service of the Synodal Department for Church Relations with Society and the Media.

His Holiness Patriarch Kirill emphasized that over the past eight years, “the Church has organized many charitable events in support of those who are in trouble, have lost their homes and have been forced to flee from military clashes.”

“As you know, with the mediation of the Church, the exchange of war prisoners took place more than once,” Patriarch Kirill added.

The Primate of the Russian Orthodox Church also expressed his conviction that the division of the peoples of historical Russia, which has reached a bloody conflict is the result of the intervention of external hostile forces, as it happened before in history.

“It is well known that the colonial powers, guided by the principle of “divide and conquer”, also created points of military tension and internecine conflicts in other regions of the globe. Today, this shameful rule, unfortunately, is also used to escalate Russian-Ukrainian enmity,” the Patriarch said.

In this regard, he emphasized that “the peoples of Russia and Ukraine, who emerged from the common Kiev Baptismal font, are united by the Orthodox faith and bound by a common historical destiny, cannot be considered the culprits of this situation.”

“They do not and cannot have any interest in the conflict,” Patriarch Kirill concluded.