Sunday saw Patriarch of Moscow and All Russia praying in the Transfiguration Church on the Holy Mount of Grabarka in Poland in the presence of tens of thousands of pilgrims as Orthodox Christians across the world are celebrating the Transfiguration of Christ.

Grabarka, first mentioned in 1710, is the holiest location for Polish Orthodox Christians. Legend has it that during an outbreak of cholera in the region, one man had a revelation from God that the disease would go away if residents, each carrying a wooden cross, climbed Mount Grabarka, put their crosses up on its top and drank from its creek. As soon as that was done, the epidemic subsided. Later, a chapel was built up there, and in 1947 the mount became a home to the women’s monastery of St. Martha and St. Maria. 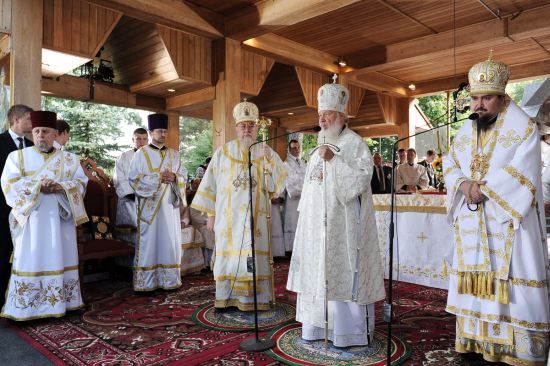 Addressing believers before the service, the head of the Polish Orthodox Church, Metropolitan Sawa, said:

“His Holiness Patriarch Kirill, whom we have been looking forward to seeing for a long time, has arrived. He came to see our faith, give us his blessing, and say his prayers for us, for our families, for our children, for our Fatherland and for the world. His visit is a great joy to us.”

Patriarch Kirill said that he had heard much about Grabarka and about the never-ending flow of pilgrims, and was happy to see it all that with his own eyes:

“My soul rejoiced at the sight of the endless trains of automobiles, of lots of people coming here, atop this holy mount, their faces aglow with happiness, for a common prayer. That means that you, the Polish Orthodox Christians, who have carved you own path through history, not an easy one, and who have carried your faith through all the difficulties, feel the need for being together and for praying together. I brought you the love and blessing of the Holy Russia, of your brothers and sisters in Russia, Ukraine, Belarus, Moldova and other countries that share common spiritual history.”

While in Poland, Patriarch Kirill visited many other locations. Whenever he went, crowds of people gathered around churches to catch a glimpse of him. Here is what an Orthodox believer named Tatyana told the Voice of Russia:

“It’s a spiritual upswing for me. It’s exhilaration to think that after Patriarch Kirill’s visit, we, the Orthodox Christians of Poland, will be looked upon by Catholics as equals. They have had the Pope visiting them more than once, and now our Patriarch has come. Of all the patriarchs, he is the closest to us.”

Sofia was among those who came to a monastery in Suprasl to see the Patriarch:

“Our churches and our faiths are very much alike, but we know so little of each other. Politicians are doing much to reconcile our countries, but the efforts or ordinary people, of believers, are also necessary. For a long time, we had no opportunity to communicate with each other, though we longed for it. Now, everything is different. A document on reconciliation has been signed and we are opening a new chapter in our history. We need to get to know and understand your people better. It’s symbolical that this new chapter is beginning with the Transfiguration of Christ. It’s a great holiday symbolizing a change in our souls and in our countries.”