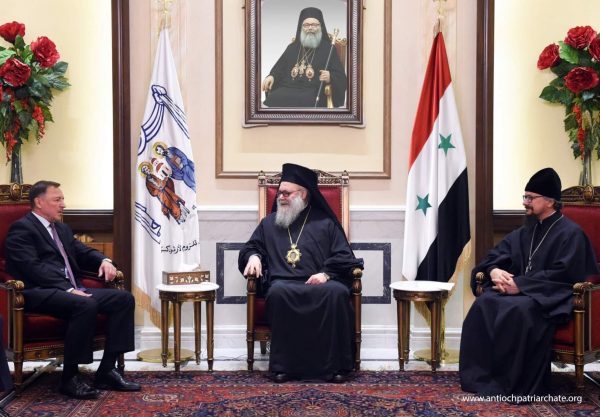 On 12 July 2020, His Beatitude John X, Patriarch of Great Antioch and All the East, met with the representative of the Patriarch of Moscow and All Russia to the Patriarchal See  of Antioch, Hegumen Arseniy (Sokolov), and Mr. A. V. Yefimov, Russia’s Extraordinary and Plenipotentiary Ambassador  to Syria.

The meeting took place at the Patriarchate of Antioch located in the historic center of Damascus. Earlier, on July 8, His Beatitude also had a talk with Hegumen Arseniy (Sokolov).

His Beatitude Patriarch John X expressed profound gratitude to the Russian Orthodox Church, its Primate – Patriarch Kirill of Moscow and All Russia, the Russian people and state for their continued invariable support for the Orthodox Church of Antioch as it, together with all the Syrian people, has found itself in a disastrous situation as a result of the prolonged and exhausting war with the world terrorism and is struggling today in the situation of an international economic blockade, to restore from ruins its churches, houses and schools.

During their long talk, the sides discussed matters of mutual concern.

Hegumen Arseniy conveyed to His Beatitude a letter from the head of the Moscow Patriarchate department for external church relations, Metropolitan Hilarion of Volokolamsk.

They were joined in their talk by Patriarch John’s vicar bishops, staff members of the Russian embassy and other officials.

They continued their communication at a fraternal dinner.