Patriarch Porfirije: The Order of Nature is Defeated where the Lord is Present 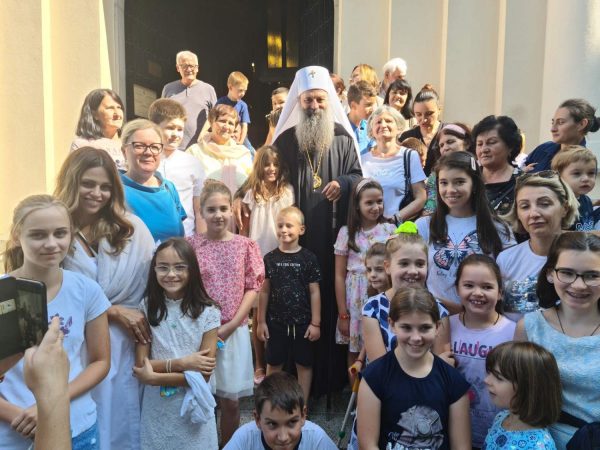 His Holiness, at the first Liturgy in Slovenia which he served as the primate of the Serbian Orthodox Church was concelebrated by His Grace Bishop Jerotej of Toplica, elected Bishops Justin of Hvosno and Sava of Marca and the clergy of the church communities of Ljubljana and Zagreb.

After reading the Gospel (Matthew 14: 22-34), the Patriarch called on those present to pray to God for peace in the world, for God’s blessing among men, but also for “peace in each of us, so that, based on Christ, we may rejoice in communion with Him. ” He also called on them to bring joy and peace around them at the same time.

The primate of the Serbian Church said that the apostles who boarded the ship, in order to cross to the other side of Lake Tiberias, intended to dedicate themselves to prayer in the desert. “Loneliness and desert, a lonely place is, as a rule, an opportunity to meet oneself, but with oneself in the face of God,” the Patriarch pointed out.

“Although they were mostly fishermen, the great storm that suddenly occurred caused fear in the apostles, until they saw the Lord walking towards them, walking on the water. The Apostle Peter, seeing this miraculous walk on the water, was suddenly encouraged. The storm frightened him, and he, seeing the Lord, would be encouraged, moreover, delighted, and addressed the word to the Lord: ‘Lord, command me to come to You on the water.” The Lord, in a simple word without much philosophizing and explaining whether it is possible or not, convincing with arguments for and against, simply said: “Come”. And Peter, just as simply, without much analysis, without question, without doubt, without the need to show him proof that it is possible to walk on water against the laws of nature, suddenly relying on faith and love, on faith in God, got down out of the ship and started walking on water “, the Patriarch said.

“And the apostle Peter, like all people, is like us who walk from unbelief, from weak faith, through temptations, to firm and strong faith. Sometimes we have such a firm and hard faith, and then from that faith again, brothers and sisters, difficulties and temptations come, doubt arises, and even rebellion, and through weak faith, we come to unbelief. So did Peter, who repeatedly showed that he had a fiery faith, that he was ready to give his life for the Lord, which he did at the end of his life. But, there were also situations when there were temptations, as in the Garden of Gethsemane, to renounce the Lord. Here now, he had first fear and then firm faith, because coming out of the boat relying on that faith, he could walk on water, even against the laws of nature. And then doubt appeared, then not evangelical, not God-man logic appeared, but human logic that wants arguments wants to see with its eyes and touch with its hands. At that moment, he began to sink. At that moment, it turned out that natural laws are stronger than man. And indeed, although we have conquered the universe and the heavens, it is all small in relation to the strength and power that nature carries within itself. Here the emphasis, as always in the Gospel, is on the Lord Christ. Where the Lord is present, a miracle is constantly happening. The order of nature is constantly being defeated there. We live there now and here in the mystery of the Kingdom of Heaven, and the Lord is present everywhere. He is present in us “, said the Patriarch Porfirije.