Pearls to the Pigs and Communion to Dogs

There seems to be however a lot of confusion nowadays about animals and their role in our lives. People treat their animals as family, take them to beauty salons and spas, leave them fortunes in their wills and expect to be joined by them in heaven.
Fr. Vasile Tudora | 22 August 2010

“Do not give what is holy to the dogs; nor cast your pearls before swine” (Mat 7:6) 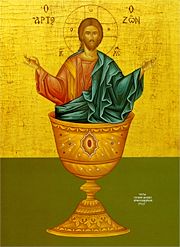 When I was a kid I had a pet, a cat, and loved it dearly.  It slept with me every night and in my teenage years felt at times as my only true friend. But there was no moment during the time we had together, that I confused my pet pal with a true human friend; it remained a cat the entire time. There seems to be however a lot of confusion nowadays about animals and their role in our lives. People treat their animals as family, take them to beauty salons and spas, leave them fortunes in their wills and expect to be joined by them in heaven.

Just when I thought I heard it all I just stumbled on a recent news story where an Anglican minister went as far as giving communion to a dog.  “It was a simple church act of reaching out to a new congregation member and his pet”, the “she” minister swiftly responded to the harsh criticism surrounding her acts.

Some may be asking what is the big fuss? The evolutionists might say: as the dogs, after all, we all come from animals; we are all products of the same evolutionary process. Why denying Communion to the dogs, aren’t they also called to be saved? What is so distinctive about humans that they get all the benefits? Man is no more unique than the other animals, it is just the refined product of a distillation process that started by chance and eventually led where we are today.

As shocking as this recent story may be, the problem of equating people with animals is not new. Even St. Gregory of Nazianz was facing some of the same controversy in the 4th century: “Men say: man is a microcosmos – and they say this thinking they elevate human nature with this grandiose title, but they did not realize that actually they have honored man with the characteristics of the mosquito and the mouse”

In the quest to prove that man comes from animals, man is actually diminished to the level of a marginally more advanced living creature and nothing else, having very little to distinguish him from his “close relatives” that still dangle from one tree branch to the other. By reducing man to his animal body, man is actually abridged to matter and any spark of spirituality is completely denied to him.  Man becomes an animal with the illusion of grandeur.

Man was created differently than the other forms of life. God created the world by a simple “let there be…” but for man He decided to fashion him in a distinctive manner. “Let Us make man in Our image, according to Our likeness; let them have dominion over the fish of the sea, over the birds of the air, and over the cattle, over all the earth and over every creeping thing that creeps on the earth.” (Gen 1:26).

The resemblance with God that makes man different than animals is the rational origin of his soul. “Animals act on impulse (they have urges) but in man there is also “logic”; it is the Grace of God which comes and establishes itself “logically” upon the soul”, says Saint Maximus the Confessor.  Animals do not possess rationality and have no free will. They possess however, through their instincts and the spirit of life planted in them, a certain basic understanding of the world, enough for them to never fail in recognizing God and serving His will.

This is why Christ did not specifically minister to animals, not because they were unworthy, or because He didn’t care about them, but because the creation already knew Him and obeyed him as God. “The ox knows its owner and the donkey its master’s crib; But Israel does not know.” (Isaiah 1:3).  The icon of Nativity shows this clearly by depicting the animals as the first witnesses of the Incarnation.

On the other hand man, misusing his God given rationality and betraying his freedom of choice, in his disobedience, has forgotten Who the Master is and has fallen into sin.  Because of man and his sin the entire creation has been turned upside down and exists in the corrupted state we see today. 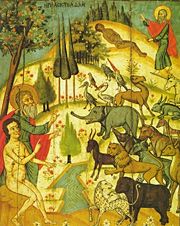 Man used to be at peace with all creation; Adam named all the animals and the animals recognized him and did not harm him.  (Gen 2:20) But when through sin division was brought in the world animals ceased to recognize man and the entire nature turned against man and against each other. (Gen 3:12-19, Gen 6:12)

The current condition of the world is different that what it was in paradise and different than how it will be in the Kingdom of heavens.  The cosmos can and will be redeemed and man is its intercessor: “the creation itself […] will be delivered from the bondage of corruption into the glorious liberty of the children of God.” (Rom 8:18-22).

We see glimpses of this new order and of the renewed relationship between man and animals in the lives of the saints were we encounter a raven feeding the prophet Elias in the wilderness, lions living with the desert dwellers like St. Paul of Thebes or St. Mary of Egypt, a bear befriending St. Seraphim and so many other examples. This was foretold in the prophecy of Isaiah “The wolf also shall dwell with the lamb, the leopard shall lie down with the young goat, the calf and the young lion and the fatling together; and a little child shall lead them.” (Isaiah 11:6) These saints have reached again in Christ the state that Adam had in paradise, when man was in harmony with the entire creation giving us all a pre-taste of the kingdom to come. 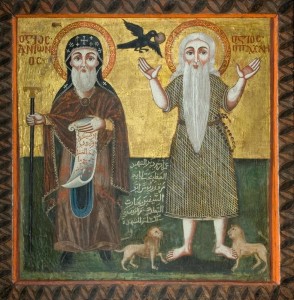 But this harmony does not mean that we can reduce man to the level of an animal nor we can elevate an animal to the level of man. Each have their distinct role in God’s providence and they cannot be confused. “All flesh is not the same flesh, but there is one kind of flesh of men, another flesh of animals, another of fish, and another of birds. There are also celestial bodies and terrestrial bodies; but the glory of the celestial is one, and the glory of the terrestrial is another.” (1Cor 15:39-40).

Clearly man was given a distinctive role in creation. Man is the only created being that resembles both the heavens and the earth. Man is lifted to the image of God by his rational soul while his animal body caries the weight of the clay. Thus, by the will of God man is, without overextending his already bloated hubris, the central piece of the created world and by fulfilling his divine purpose he redeems the entire cosmos with him. “All things”, argues St. Maximos the Confessor, ” which have been created by God, in their diverse natures, are brought together in man as in a melting-pot, and form in him one unique perfection- a harmony composed of many different notes.‘”

Christ came to redeem man so man can be united with God and through man the whole creation to be made part of this union. Man is called to unite creation with the Creator and the entire nature supports him in His endeavor. This is the proper order of things that man cannot change but can freely choose to respect and use for the accomplishment of his divine potential.