ASAP, my wife and I attended a Saturday night vigil service at St John's. Within 10 minutes, we knew we were home. Everything about the situation cried out: "This is what the Church is all about! This answers our need!" Our impression was solidified by two people who talked to us for an hour and a half after a long (3-hour) vigil service. After that, conversion was a matter of time. We never looked back. My wife, my son and I were baptized on August 24th, 1986. Our first communion was on the Dormition of the Mother of God.
| 15 October 2009

I became interested and involved in Anglicanism through a singing job in a “high” church in 1968. At the time, my focus was primarily musical. My parents were devout Southern Baptists, and, while I now appreciate their humility and devotion, in my youth I did not so much. The Episcopal Church offered an escape from the music and worship of the Baptists, which, shall we say, were not to my taste.

The Western liturgical tradition as carried on by the high-church Anglicans seemed to me to be just the right combination of grandness and sobriety justly suited to worship. Having just come from the Baptists, the intellectual and spiritual confusion which at length gave rise to tradition-destroying innovations did not concern me for a long time. I chalked it up to our fallen state, for which God was making accommodations which I did not understand. I thought I could press on for the sake of art and faith, and pray that everything would come out alright. It was going to take a great deal to make me want to throw away Tallis, Byrd, Weelkes, Purcell, …, RVW, Walton, Britten, … , not to mention all the great hymns and tunes, and the gorgeous language of the (old) Prayer Book and Psalter.

A great many things happened, but I’ll cut to the chase. In 1984 or 5, a lesbian member of our parish who sang in my choir asked me to be a member of a committee to help her explore a calling to the priesthood. Needless to say, I begged off. But I did not have the courage to tell her that the thought of her as a priest made me sick. You may be familiar with the musical “Fiddler on the Roof”. From time to time, Tevier has to accommodate himself to faits accomplis, and he gives voice to his process, alternating his objection with: “But, on the other hand…”. Finally, he is forced by his convictions to say: “There IS no other hand!” I came face to face with something that could not be integrated with my convictions, nor could it be subsumed under any idea of divine economy. If the Scriptures meant anything, then her “calling” could be nothing but an abomination. I still said nothing, however, even to my wife. We did not talk about it. We just knew I couldn’t have anything to do with it. 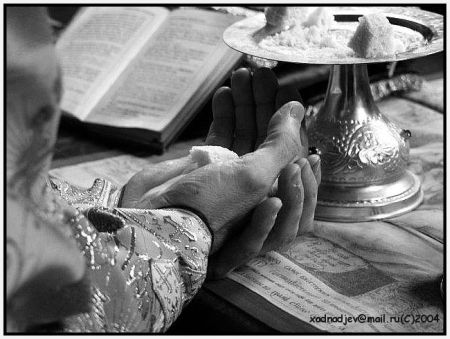 From around the same time, in reaction to some dramatic personal events, we gradually became more devout. Our faith in God became more precious to us. We began to devour spiritual literature. In the course of our reading, we came upon a speech delivered by Alexander Solzhenitsyn when he was given the Templeton Prize for Progress in Religion. His theme and tone spoke to us like one of the prophets. The fact of his Orthodoxy did not impress itself greatly upon us then. His faith did.

Solzhenitsyn said that our terrible spiritual condition was because “men have forgotten God”. He said that the fiercest attacks of the communist revolution had not managed to uproot Christianity from the Russian people. Again, at the time, this seemed to be attributable to fervour of faith stimulated by persecution and in no way connected in our minds to any idea of Orthodoxy being especially distinct among the “parts” of the Christian Church.

We came upon another book called “Russia’s Catacomb Saints”. The experience was overwhelming. We thought we knew what devotion was, but came to know that we had not even begun. We realized that our faith was virtually non-existent compared with that of the numberless crowd of those who in Russia had cheerfully given their lives, blessing their tormentors the while. What was this fountain that gave them strength to “endure to the end”?

We looked around at our church situation. Would the agenda of the leadership of the Episcopal Church, which seemed to consume the hearts of clergy with whom we were acquainted, be worth dying for? Where did it come from? The newspaper? In our church context, we were viewed as near-fanatics, cases to be “handled”. Please understand. We were not lifting our hands in church and saying “Praise Jesus”; we weren’t speaking in tongues, we weren’t transcendentally meditating or anything weird. We simply took seriously what was said in the Bible, Prayer Book and hymns.

We heard a chord resound in our hearts with the faith of the Russians, and we wanted to find that faith in the flesh.

Right about this same time, I was having a casual after-rehearsal conversation with one of my choir members who was interested in things Russian, in fact, he spoke Russian. (He taught me how to say “Ya ni gavariu pa Russki”) I had commiserated with him before about “difficulties” I was having, which he and I shared to some extent. In the course of the talk, I mentioned the book that we had read. In that book, the Russian Orthodox Church Outside Russia was mentioned as having retained the traditional Orthodox faith and carried it throughout the world since the time of the revolution. He said that he had once gone to a church made up entirely of those who had not bowed the knee to the Bolsheviks. His expression to describe their worship: “a bunch of little old men standing around in the dark”. I know that doesn’t sound very appealing, but something leaped inside me which said “check this out!”

ASAP, my wife and I attended a Saturday night vigil service at St John’s. Within 10 minutes, we knew we were home. Everything about the situation cried out: “This is what the Church is all about! This answers our need!” Our impression was solidified by two people who talked to us for an hour and a half after a long (3-hour) vigil service. These two, Father Leonid Mickle and Tatiana Vsyevolodna Prujan, became our Godparents.

After that, conversion was a matter of time. We never looked back. My wife, my son and I were baptized on August 24th, 1986. Our first communion was on the Dormition of the Mother of God.

This description is obviously greatly foreshortened. I wish to emphasize that we were more drawn into Orthodoxy than we were repulsed by the confusion and corruption which we left. And I don’t want to convey that it has all been peaches and cream since then. No. But, God’s grace has been sufficient for us, just as it was for Saint Paul, just as it suffices for the life of the Church for ever. This awareness lightens and enlightens difficulties. The spiritual struggle begins to take on the quality of an adventure to be entered into with gusto, rather than a great burden to be borne.

Beside the richness which is in traditional Orthodox Christianity, the difficulties pale. The ethnic component? Sure, it’s there. We have been in this parish, of which I am now the assistant pastor, for 9 years. I still haven’t learned Russian. By the grace of God, I can serve tolerably well in Slavonic. We have services in English 2 or 3 times a month. I serve all of those. My wife directs the (English) choir. (Poor dear has to put up with my grumpiness even now.)

I can (and would) go on and on. I think there is a conventional limit on windiness which I’m sure I’ve over-topped. Please forgive me. I imagine that I’m one of those blind men with the elephant who suddenly regains his sight and sees the enormity of the whole. But no amount of talk can convey what it’s like to be in the Church. I look forward to talking to you, but even more I look for the day when you make the step to become part of that One Holy Catholic and Apostolic Church. The thing described in that formidable phrase contains wealth untold and endless, or as the Lord says: “pressed down, shaken together and running over”. Anything that would keep you out of the Body of Christ is from the deceiver.