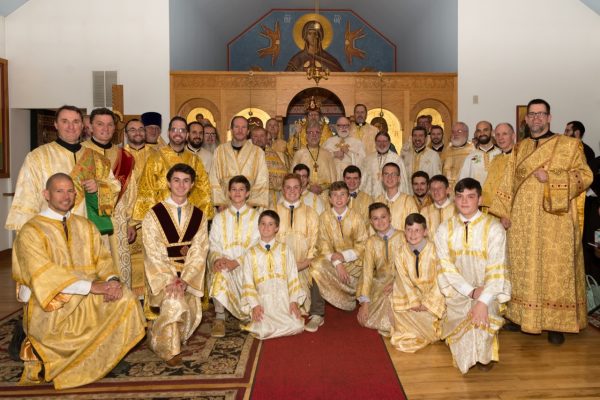 “The parish traces its official planting as a mission community to 1993, when a small group of 16 people ventured out in faith to purchase the parish’s current building at 119 South Sparks Street and made the commitment to supporting a full-time priest,” said Deacon Alexander Cadman.  “Holy Trinity was one of the early recipients of the Orthodox Church in America’s Church Planting Grant, which it first received in 1996 and from which it ‘graduated’ three years later.”

The theme of the day’s celebration, which included the celebration of a Hierarchical Divine Liturgy and a benefit luncheon, was “Building up the Church Beyond the Parish.”  It honored the many ways that current and former members of the community have contributed to the Orthodox Church in America and the Orthodox Church at large.  In addition to acknowledging the national and local ministry of Archpriest John M. Reeves, Holy Trinity’s first and only full-time priest who will be retiring in December 2018, dozens of clergy and ministers were recognized.

“This was particularly evident by the Liturgy itself, in which more than 30 priests, deacons, missionaries, and monastics participated,” Deacon Alexander continued.  “Nearly all of them came into the Orthodox Faith through or were impacted in a significant way by the parish’s outreaches, especially the Penn State Orthodox Christian Fellowship [OCF].  Even His Eminence, Archbishop Melchisedek — who presided at the Liturgy and offered the opening remarks at the luncheon — first heard about what God was doing through the parish nearly two decades ago through an encounter he had as a monastic in Greece with one of the parish’s alums (who was then a missionary and is now a full-time priest).”

In addition to the parish alumni who were honored, the church’s current staff and ministries were also highlighted.  Priest David Smith presented, on behalf of the Chapel of the Holy Spirit—Holy Trinity’s outreach in rural Pennsylvania, which is a model of the “Chapel of the Ease” concept that the Archdiocese of Pittsburgh and Western Pennsylvania is currently pioneering.  One of the Chapel’s faithful, Evan Kerstetter was tonsured a reader during the celebration.  Deacon Mark Oleynik, Director of Christian Education, was awarded the double orarion by Archbishop Melchisedek, who also recognized the parish’s commitment to the discipleship of youth.  Deacon Alexander Cadman, Director of Ministries and Chaplain of the Penn State OCF, was presented with a gramota for exemplary diaconal service by Archbishop Melchisedek, who expressed appreciation for the parish’s charitable partnerships.  During the program, it was announced that the luncheon’s beneficiary, Holy Trinity’s “Matthew 25” ministry, raised about $15,000.00 for the underprivileged and malnourished in central Pennsylvania.

Father John and Matushka Linda Reeves were honored by the Penn State OCF, Sunday School, and current and former parishioners for their 37 years in active ministry to the Orthodox Church in America at the national, regional, and local levels.

“Holy Trinity is preparing itself for the end of this era, one marked by humble beginnings, consistent growth, and the spread of the Gospel,” Deacon Alexander concluded.  “Father John’s replacement will be appointed by Archbishop Melchisedek in the coming months.  In his benediction, Father John exhorted attendees not to focus on him or the past, but rather on its core values, especially apostleship, and continue the parish’s mission of sending people to contribute to the work of Christ and His Church.”

View the gallery of photos on Holy Trinity’s website.