President Bronislaw Komorowski hosted Sawa, Orthodox Archbishop of Warsaw and Metropolitan of All Poland, in a special New Year meeting at the presidential palace. 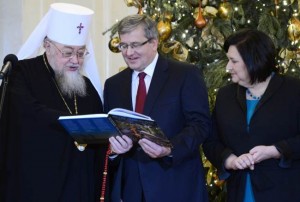 Addressing the entire Orthodox community in Poland, the president expressed his wishes that “both at home and in the church, everything will be at its very best.”

Komorowski referred to Poland’s history as a country of many faiths and cultures, expressing his hope that Poland “embraces everyone to the heart, and not only on festive occasions.”

He added that “diversity is a beautiful thing, provided that it goes hand in hand with the capacity to act for the common good.”

The president also met other representatives of the Orthodox Church, thanking them for their help in co-organising last year’s visit of Patriarch Kirill, head of the Russian Orthodox Church.

During the August 2012 visit, leaders of Poland’s Roman Catholic Church and the Russian Orthodox Church signed a joint declaration of mutual forgiveness referring to the traumatic history of relations between the two countries.

“This is proof that by working together… we can achieve a great deal,” Komorowski noted.

Poland’s Central Statistical Office (GUS) records that there are over 500,000 Polish citizens affiliated to the Orthodox rite.