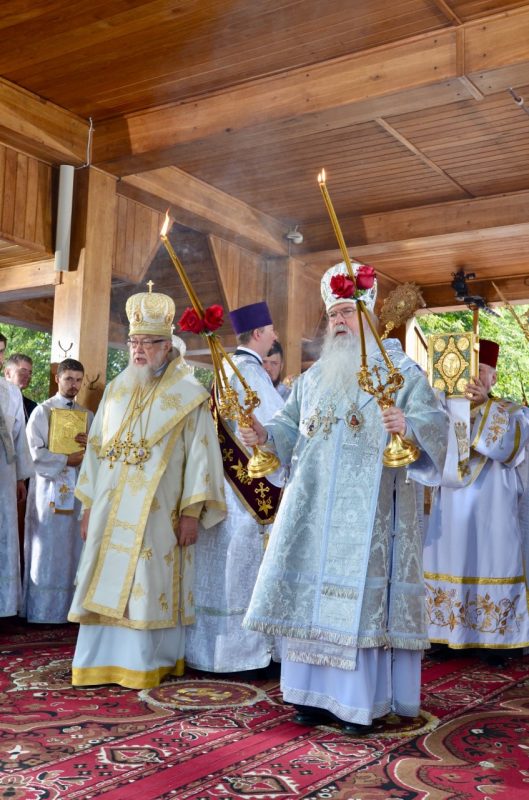 Metropolitan Tikhon and the members of the OCA delegation were familiarized with the vibrant life of the Polish Church through visits to numerous parishes, monasteries and other Church sites, especially in the country’s northeastern and south central regions, where there are many centers of Orthodox Christian life.  The highlight of the visit occurred as Metropolitan Tikhon and the delegation participated in the annual pilgrimage to the Monastery of Saints Martha and Mary on the Holy Mountain of Grabarka, which coincided with the Great Feast of the Transfiguration August 18-19.  The pilgrimage attracts thousands of faithful from across Poland and beyond, many of whom arrive at the monastery’s gates after walking several days from their home towns.  Metropolitan Tikhon concelebrated the festal Divine Liturgy with Metropolitan Sawa and Archbishop Benjamin, the members of the Holy Synod of Bishops of the Church of Poland, delegation members, and dozens of clergy.

At the conclusion of the pilgrimage Divine Liturgy, Metropolitan Tikhon addressed the faithful and was greeted with warm words of welcome by Metropolitan Sawa, which appear below.

Before World War II, the Orthodox Church in Poland ministered to several million faithful, but after much of Poland’s territory was incorporated into what is today Belarus, Lithuania, and Ukraine during the post-war years, its numbers were greatly reduced.  Today, the Church of Poland counts some 700,000 faithful in more than 300 parishes and missions throughout the country.  In addition to the Archdiocese of Warsaw, the Church has dioceses in Bialystok, Lublin, Lodz, Wroclaw, and Przymysl.  It maintains a graduate theological faculty and undergraduate seminary in Warsaw, a growing number of monasteries, and a very active national youth fellowship.

The Orthodox Church in America and the Orthodox Church of Poland have enjoyed a long and especially close relationship, and many late 19th century and early 20th century immigrants arrived in the United States and Canada from regions that today lie within Poland’s borders.  Saint Patriarch Tikhon served as rector of the seminary in Chelm for five years and then as Bishop of Lublin for a year before his arrival in America in 1898, while the OCA’s late Metropolitan Ireney, the late Archbishop Kiprian and many other clergy served the Polish Church prior to their arrival in the United States after World War II.  In recent decades, the two Churches have cooperated closely in a number of areas, including youth ministry and religious and theological education.  A number of hierarchs and clergy of the Church of Poland are graduates of Saint Tikhon’s Seminary, South Canaan PA and Saint Vladimir’s Seminary, Yonkers, NY.

Today the Orthodox Church is celebrating the Great Feast of our Lord – the Transfiguration of Jesus Christ on Holy Mount Tabor.  Gathered together on this Holy Mountain of Grabarka, we relive this event.  With our thoughts and our prayers and our spiritual experience, we are in the Holy Land at Mount Tabor.

Being with the apostles Peter, James. and John, Jesus uncovered for them a small part of His divine glory.  Two Old Testament prophets, Moses and Elijah, talking to Christ appeared to these three apostles, who felt extraordinary peace and spiritual joy.  They called out: “Lord, it is good to be here” [Matthew 17:3].

We, who have gathered here today in this place that is very important for us, exclaim: “O Lord, it is good to be here.”  And we repeat it every year for centuries.  Numerous pilgrims from various parts of our home country and from abroad come to Grabarka to change their lives and to feel a blissful state of their soul, similar to the state of the souls of the apostles on Mount Tabor.  Pilgrims carry their crosses and walk several days on foot to reach the Gate of Grabarka Monastery.  Then, after walking on their knees around the temple, they put their crosses in the ground, asking intercession for their personal, family or social intentions.

Today, on the 100th anniversary of the regaining of independence by our country, we will also set a Holy Cross on this Grabarka Mountain, among the many thousands of other crosses that are the testimonies of our ancestors.  Our intention is that God may bless our land and give His blessing, health and prosperity for all citizens.

Brothers and Sisters!  Today His Beatitude, the Most Blessed Tikhon, the Metropolitan of America and Canada, is with us.  He came to Poland on an official visit.

Your Beatitude, Dear brother in Christ!  I greet you here on our Polish land, on our Holy Mountain of Grabarka, in the women’s monastery of Saints Mary and Martha.  I greet you with the words: “Blessed is he that comes in the name of the Lord.”  Today by the Providence of God, we have the opportunity to offer testimony to the contemporary world through the liturgical unity of the Orthodox Church in America and Canada with the Orthodox Church in Poland.  The Divine Liturgy is for us the most holy act of our human hands.  The Liturgy unites us in the Holy Chalice and expresses the plenitude of the Church.  In the light of this truth, language or cultural differences do not have any significance.  Christ Himself unites us in the Eucharist.  In this truth is found the magnitude of the Orthodox Church.

Therefore, nothing and nobody can go against the way of the Church’s real historical existence.  Today, Orthodoxy testifies to Christ on all continents of the world.  The Orthodox Church in America is one of these examples.  We bring this optimism to today’s world, despite its division.  We are aware that it is only by being united in Christ that we can solve the problems of the modern time.  Our present fraternal meeting in Eucharistic prayer helps to reach this purpose.  The Holy Eucharist strengthens and develops the spirit of true conciliar Orthodoxy, which is based on equality and mutual respect and offers the world a good example.  The Orthodox Church in Poland tends to follow this path and strengthens our bonds, mutual ministry and help.

The Orthodox Church is always in pain when humanity experiences various spiritual and physical difficulties—especially when a person suffers at the hands of another man.  People of today’s world see war, terrorism, poverty, and lack of justice.  The Church always reminds us that Golgotha took place on the human life’s path, and after it there was Resurrection, which brings great happiness.

Your Beatitude, spiritual bonds, understanding, and cooperation unite our Churches.  Many of our priests were, or still are, on their pastoral ministry in your Church.  We are glad of this situation.  In a spirit of fraternal love and deep respect I welcome Your Beatitude and the members of the delegation accompanying you in our center of spiritual life in the Orthodox Church in Poland, at the Holy Mountain of Grabarka.  We are happy you are with us for the official visit to our country and Church.

Your Beatitude!  In this year, our country, the Republic of Poland, celebrates the 100th anniversary of the regaining of independence.  Today we pray together for God’s blessing for Poland and for the whole world, for peace in the contemporary world, and for all mankind.  We believe that prayer can accomplish much.

Today we also make mention of the year 1938.  Eighty years have passed from the moment of the destruction of our churches.  In this holy place, we make mention of all who defended their churches.  We pray for those who have gone to eternity and those who today are alive and remember these painful events.  We commemorate it today so that similar situations will not happen any more in Poland or any other country.

And finally, I ask the Lord: Mighty and great God, bless us to change our lives to feel spiritual joy similar to the joy that the apostles felt on Mount Tabor.