Source: Basilica.ro
Nearly five years after its foundation stone was laid, the Hagia Sophia Cathedral in Warsaw was festively consecrated on the eve of the feast of the Nativity of the Most-Holy Theotokos.
Iulian Dumitraşcu | 25 September 2020 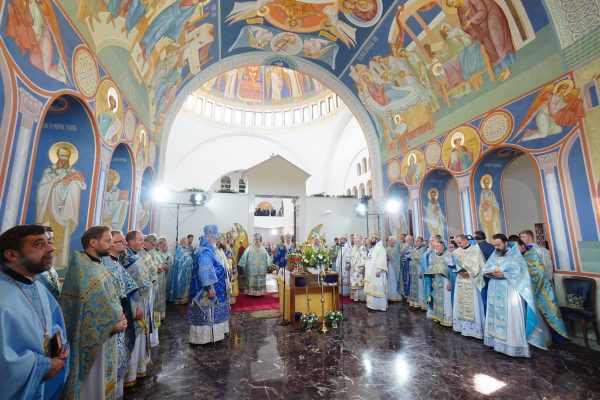 The new cathedral, based on the iconic Hagia Sophia Cathedral in Istanbul, is the first Orthodox church to be built in Warsaw in a century and is the third active Orthodox parish in the capital. Sunday’s Liturgy was the second to be served there, the first having been served in May 2018, less than three years after the blessing and laying of the church’s foundation stone by Patriarch Bartholomew of Constantinople and Metropolitan Sava of Warsaw on December 5, 2015.

Sunday’s celebration began with a procession into the cathedral headed by Met. Sawa together with 9 other hierarchs of the Polish Church. The cathedral was filled with believers from all over Poland. The hierarchs then blessed Holy Water and blessed the entire cathedral with it, reports the Polish Orthodox Church.

The head of the Polish Church expressed his thanks to the Holy Trinity, and spoke of the Liturgy that would be served in the new church from then on. Previously, the faithful gathered in a temporary wooden church built nearby.

“It is the Liturgy,” he said, “that sanctifies man and the world around him, and unites him with God and others. It also unites us with our ancestors, who sacrificed their sweat and blood on the altar of holy Orthodox, for a free homeland, starting from the 16th century through the First and Second World Wars, deportations, exiles, resettlement, Operation Vistula, camps, and labor camps like Sibir, Katyn, Miednoje, Telerhof, Oświęcim, Dachau Gross Rosen, Ravensbrűk, Mauthausen, the demolition of the church, or the Warsaw Uprising, in which the clergy of Warsaw, the faithful, young people and children were killed.”

His Beatitude also emphasized that the Warsaw Hagia Sophia is based on the architectural gem in Istanbul and expressed the pain felt by all Christians over its recent conversion into a mosque. “Let us reflect on the fact that, in accordance with God’s will, we, here in Warsaw, in the center of Europe, are putting to use, in Church life, a copy of this magnificent building of Constantinople,” Met. Sawa said. Archbishop Jerzy of Wrocławsko-Szczecińska preached after the Gospel reading, referring to the feast of the Nativity of the Mother of God and the importance of the new cathedral. His Eminence recalled that the capsule laid together with the foundation stone of the cathedral contained earth covered with the blood of innocent orphans who were murdered in the 1944 Wola massacre. “Their blood is connected today with the blood of the holy martyrs of our Church,” Abp. Jerzy said.

“Human memory is not infallible,” he continued. “The only sure recipe for eternal Remembrance is prayer. And where else, if not in the church, is the best place to transmit this memory from generation to generation and to sustain it until the end of the ages?”

The Liturgy was followed by a procession around the church, after which Met. Sawa thanked all donors and all those who contributed to the construction of the cathedral, as well as all those who came to pray on the day of its consecration. He also offered a set of liturgical utensils to the church.

The celebration culminated in the singing of a Te Deum, followed by a communal meal prepared for all the faithful. Work on the interior of the cathedral is still underway and is expected to be completed next spring. The cathedral was built entirely with funds collected from parishioner donations, reports TASS.

There are about 30-40,000 Orthodox believers in Warsaw, who until now had only two active churches: the Cathedral of St. Mary Magdalene, built-in 1867-1869, and the Church of St. John Climacus, built-in 1905. At the beginning of the 20th century, there were several dozen Orthodox churches in the Polish capital, though most of them were destroyed in the 1920s.