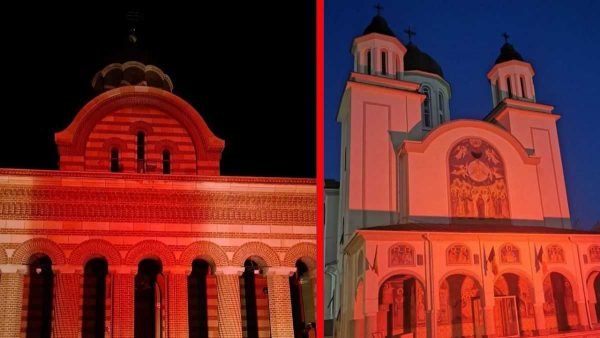 A number of churches and monasteries of the Târgoviștei Archdiocese of the Romanian Orthodox Church drew special attention to the suffering of Christians worldwide on the occasion of Romania’s National Day of Awareness of Violence Against Christians on Monday.

The day, officially established last summer, coincides with the feast of the Brâncoveanu Martyrs who were martyred in 1714 in Constantinople for refusing to abandon their Orthodox faith and convert to Islam.

“To highlight the significance of the day, but also to make contemporaries aware of the need for a renewed Christian commitment, with the blessing of His Eminence Metropolitan Nifon, the churches and diocesan monasteries linked to the holy Martyr Voivode Constantin Brâncoveanu were illuminated in red, a color symbolizing the blood of martyrs,” reports the Târgoviștei Archdiocese.

The Romanian Patriarchate’s Basilica News Agency explains that the day was established to inform the public, including young people, about the role of Christianity in the history of Romania and about the nature and extent of Christian persecution that continues to this day.

The Agency also cites the Open Doors Christian NGO statistic that an average of 8 Christians worldwide are killed for their faith every single day.

Suprasl, Poland – Over 90 youth and youth workers from 22 countries participated in “Suprasl 2022: A World…