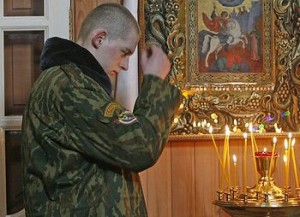 The blessing of prayer rooms has taken place in the village of Alkhan-Kala in the Chechnya Republic. The prayer rooms are intended especially for police officers from Orenburg who are on assignment in the North Caucasus. Now each Ministry of Internal Affairs worker who is far from his home will have an opportunity to pray or just to stay for a short time alone with his thoughts.

Prayer rooms are equipped in a special small portable structure. One of them is intended for representatives of the Orthodox confession, and another one, for Muslims, reports Smartnews.

The head of the Department of the Diocese of Orsk for Cooperation with Armed Forces, Law-enforcement Institutions and the Ministry of Emergency Situations Archpriest Dmitry Solonin came for the blessing of the Orthodox prayer room.

The leaders of the Ministry of Internal Affairs have for long time been productively cooperating with the diocese of the Russian Orthodox Church and the Religious Board of Muslims. The Church of Archangel Michael is currently being built in the public garden of police major Viktor Samokhin.