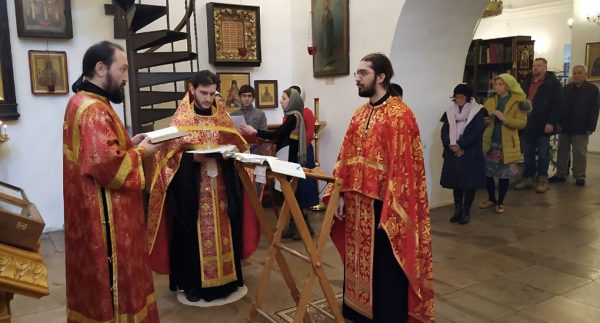 A prayer service for deliverance from the coronavirus epidemic, which is spreading in different countries of the world, will be performed weekly at the Chinese Patriarchal Metochion in Moscow. Archpriest Igor Zuev, Rector of the metochion, stated that the services will take place at St. Nicholas Church in Golutvin.

According to him, the services will be held weekly on Sundays after the Chinese Liturgy, at 9:15, until the situation improves. “Prayer singing and prayer for the health of God’s servants in the land of China will be performed during a destructive pestilence and a deadly ulcer,” said Father Igor, reports RIA news agency.

The priest noted that prayers during various large-scale emergencies are a natural tradition for the Orthodox Church.

Archpriest Igor Zuev said that before the revolution, it was common for believers during epidemics of cholera or plague to impose a multi-day fast on themselves, perform prayer services and hold religious processions with miraculous icons or to holy places.

Father Igor recalled, prayers “during a fatal plague and a fatal ulcer” were performed, for example, in 2009 in the Voronezh Metropolis on the occasion of the flu epidemic.

Speaking about the essence of prayer, the clergyman emphasized that “a prayer is not a panacea or magic.”

“From the point of view of the Orthodox faith, death, illness and suffering are the result of human sin… Therefore, in prayers for health and getting rid of pestilence, it is imperative to ask God to forgive our sins,” the archpriest explained.

Earlier the World Health Organization (WHO) recognized the outbreak of a new coronavirus as a public health emergency of international importance.