Primate of Orthodox Church of Alexandria Arrives in Moscow 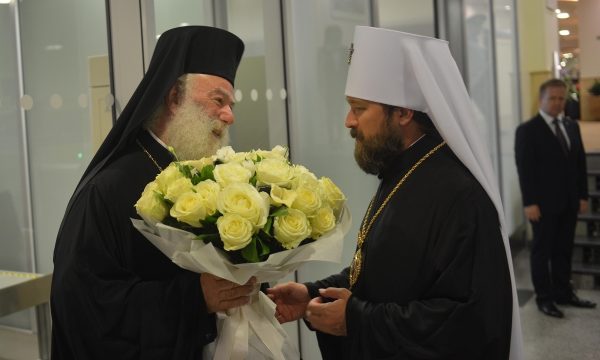 On July 26, 2018, His Beatitude Theodoros II, Patriarch of Alexandria and All Africa, arrived in Moscow for the celebrations devoted to the 1030th anniversary of the Baptism of Rus’.

Talking to journalists at the airport, the Primate of the Orthodox Church of Alexandria noted that he had been to Moscow many times and was glad to come here again at the invitation of Patriarch Kirill of Moscow and All Russia to take part in the celebrations in honour of the 1030th anniversary of the Baptism of Rus’ as ‘a great event that happened through the holy Prince Vladimir Equal-to-the Apostles’.

His participation in the celebration on this day, His Beatitude said, is a testimony, among other things, to the friendship which has tied the Patriarchates of Alexandria and Moscow for centuries. ‘My presence is aimed to show that we are together, we are side by side with His Holiness Patriarch Kirill of Moscow and All Russia’.

‘We all’, he continued, ‘are one Orthodox family, and with time it becomes visible that Orthodoxy becomes ever stronger, that it can bring its message to the world. The faithful of the Russian Orthodox Church number millions; we in Africa are going through, one might say, the first apostolic era of the Church and preaching the gospel to people who have not yet known Christ. Altogether we make one Orthodox family and should preserve the unity so that we may bear our witness’.

Answering questions from mass media reporters, Metropolitan Hilarion underscored, ‘The celebration devoted to the 1030th anniversary of the Baptism of Rus’ reminds us of our common sources – the holy Prince Vladimir’s Dniester baptismal font from which the Russian Orthodox Church was born, from which a united people were born, now already divided into three nations but spiritually continuing to preserve their unity. And a guarantor of this unity is the Russian Orthodox Church which unites millions of the faithful in Russia, Ukraine, Byelorussia and other neighbouring states as well as a great number of the faithful in diaspora all over the world, uniting them all in a spiritual and cultural space that goes beyond human borders and human divisions’. The archpastor also recalled the profound influence made by the adoption of Christianity on the people’s worldview, their morals and the Russian culture. ‘It is difficult to conjecture what the history of Russia would have been if Prince Vladimir had not made that epoch-making choice. It is difficult to imagine what Russia’s culture would have been if there had been no Russian Christianity’, Metropolitan Hilarion stressed noting that the masterpieces of Russian culture are literarily imbued with the Christian spirit.