Primate of Serbian Church completes his visit to Moscow 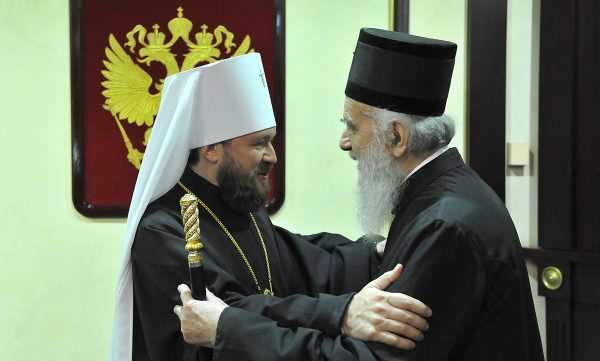 On 25 May 2018, His Holiness Patriarch Irinej of Serbia completed his visit to Moscow.

The Primate of the Serbian Orthodox Church was accompanied on his visit by Bishop Irinej of Bačka; Archimandrite Isihije (Rogič), abbot of the Kovilj Monastery, Bishop elect of Mohač; Deacon Aleksandar Prascevič, head of the Patriarchal Office; and Mr. Dejan Nakič, personal secretary to the Patriarch and director of the Belgrade archdiocesan workshop.

Among those seeing off His Holiness Patriarch Irinej at the Sheremetyevo Airport were Metropolitan Hilarion of Volokolamsk, chairman of the Moscow Patriarchate’s Department for External Church Relations; Bishop Ioann of Domodedovo; Archpriest Nikolai Balashov, DECR vice-chairman; Archpriest Igor Yakimchuk, DECR secretary for inter-Orthodox relations; Mr. Valery Alexeyev, president of the International Public Foundation for the Unity of Orthodox Christian Nations; Mr. Andrei Khoshev, DECR staff member; as well as Bishop Antonije of Moravica, rector of the Moscow Representation of the Serbian Orthodox Church.

On May 23, a meeting between the Primates of the Russian and the Serbian Orthodox Churches took place at the Patriarchal working residence in Chysty side street in Moscow.

His Holiness Patriarch Irinej received a prize of the International Public Foundation for the Unity of Orthodox Christian Nations. The award ceremony was held in the Hall of Church Councils of the Cathedral of Christ the Saviour in Moscow on May 23.

On May 24, commemoration day of Ss. Cyril and Methodius, Equals to the Apostles and Enlighteners of the Slavs, His Holiness Patriarch Kirill of Moscow and All Russia and His Holiness Patriarch Irinej of Serbia celebrated the Divine Liturgy at the Cathedral of Christ the Saviour in Moscow. After the service they arrived in Red Square to attend a festive concert that marked the Day of Slavonic Literature and Culture.

Later the Primates of the Russian and Serbian Orthodox Churches attended a reception at the Cathedral of Christ the Saviour.

That same day in the evening His Holiness Patriarch Irinej visited the Church of Ss. Peter and Paul at Yauza Gates – the Moscow Representation of the Serbian Orthodox Church.