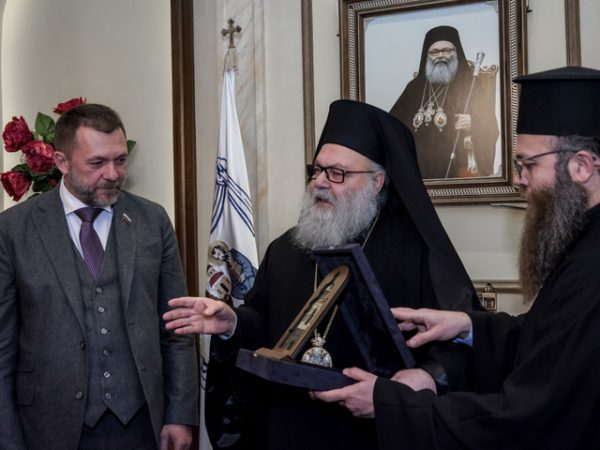 On December 23, 2021, His Beatitude Patriarch John X of Antioch and All the East met in Syria with a delegation of the Russian Federation State Duma.

Among the topics the participants discussed in their conversation were the humanitarian situation in Syria aggravated by the spread of the coronavirus infection, the defence of the rights of Christians and the fundamental religious and moral values of the society.

As was related by State Duma deputy S. A. Gavrilov, president of the Inter-Parliamentary Assembly on Orthodoxy, who participated in the meeting, Russian Parliament members proposed to consider a possibility for holding in Damascus an international forum devoted to dialogue of cultures and religions that would gather together representatives of world religions and political and public figures. “The keynote should be put on solidarity, peace-making, mutual respect for religious values and national traditions”, he noted.

They also discussed the cooperation continued even in the situation of the pandemic on the level of parliaments on the exchange of experience in defending the traditional values and human rights.

M.P. Gavrilov said in particular that the Orthodox M.P.s from Russia maintain contacts with their Syrian colleagues concerning the development of interreligious relations and humanitarian cooperation. Members of the inter-factional group for defending Christian values have come to Syria with humanitarian projects since 2014. Parliament members actively work within the framework of the Inter-Parliament Assembly on Orthodoxy. In 2021, Metropolitan Baselios of Accra was a speaker at the 28th General Assembly of the IAO on Crete. The Syrian delegation also presented its position at the recent meeting of the IAO General Secretariat on Corfu.

His Beatitude Patriarch John X supported the proposal for holding an interreligious forum in Syria. The Primate of the Orthodox Church of Antioch gave a high value to the work of the IAO members and also spoke in support of the stand taken by the Russian Orthodox Church on the church schism in Ukraine imposed from outside.

His Beatitude asked the representatives of the Russian Parliament to convey his greeting and good wishes to His Holiness Patriarch Kirill of Moscow and All Russia and to all the Orthodox faithful in Russia.