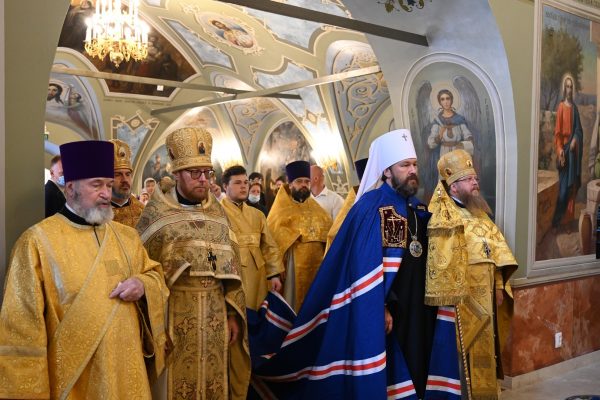 On June 24, 2021, the commemoration day of the Holy Princess Olga Equal-to-the-Apostles, Metropolitan Hilarion of Volokolamsk, head of the Department for External Church Relations of the Moscow Patriarchate and rector of the Ss Cyril and Methodius Institute of Post-Graduate Studies, celebrated the Divine Liturgy in the church dedicated to Martyrs and Confessors Prince Michael of Chernigov and His Boyar Theodore the Wonderworkers, which is a part of the Patriarchal Metochion of the Martyrs of Chernigov. The metochion accommodates Ss Cyril and Methodius Institute of Post-Graduate Studies.

That day was His Eminence Hilarion’s 55th birthday.

The deacons were led by Protodeacon Vladimir Nazarkin, assistant to the DECR chairman.

Among the worshippers were Sister Sophia (Silina), mother superior of the Novodevichy Convent of the Resurrection, and the DECR staff members.

During the Fervent Prayer, petitions were lifted up for deliverance from the coronavirus infection.

After the Fervent Prayer His Eminence Hilarion lifted up the prayer read during the spread of a pernicious infection.

After the Divine Liturgy, Metropolitan Dionisy of Voskresensk read out a message of greeting from His Holiness Patriarch Kirill of Moscow and All Russia on the occasion of the Metropolitan Hilarion’s 55th birthday. On behalf of the Primate of the Russian Orthodox Church, Metropolitan Dionisy presented the DECR chairman with an old icon of the Saviour and a bouquet of white roses.

Speaking on behalf of His Beatitude John, Patriarch of Antioch, Metropolitan Niphon extended to His Eminence Hilarion best birthday wishes. He wished the hierarch good health and further success on his high post in the service of the Russian Church. He said in particular, “You, dear Eminence, give to those who serve with you an example of commitment to the Church and the Motherland. You use your manifold education for the benefit of the Church; you head the oldest synodal department that strengthens relations between Churches and nations. Your brilliant pastoral word, fascinating theological books and elevated music reveal to people the richness of the Holy Church. May the Lord send His grace for the fulfilment of your good intentions for the glory of the Russian Church and Great Russia”.

A message of greeting also came to Metropolitan Hilarion from His Beatitude Theophilos III, Patriarch of the Holy City of Jerusalem and All Palestine.

Bishop Anthony of Moravici read out a congratulatory message from His Holiness Porfirje, Patriarch of Serbia.

The birthday message from His Beatitude Rostislav, Metropolitan of the Czech Lands and Slovakia, was read out by Archimandrite Seraphim (Shemyatovsky).

Birthday massages from Primates of the Orthodox Churches of Romania, Bulgaria, Poland and Orthodox Church in America were read out by Archpriest Igor Yakimchuk.

Then the congregation was addressed by Metropolitan Hilarion:

I would like first of all to thank God for the years that I have lived on this earth and, most importantly, for the Lord’s call to me from my youth to join His Holy Church, and every day I receive from the Church spiritual nourishment, spiritual consolation and inspiration for all the works that the Lord has entrusted to me through the Supreme Authority. Without this inspiration it was impossible to accomplish anything from what was accomplished and to what is being accomplished.

The service of an ordinary parish priest exceeds human resources, for a priest should either take upon himself the sorrows, illnesses, sins of other people or learn to let all this go through his heart and only after that entrust it on God. And as regards bishops as those who are charged by the Supreme Authority with very important tasks, then this responsibility grows multiply. And no human resources would be sufficient to carry out these church services, if the Lord Himself did not strengthen us, clergy, by His grace.

Sometimes it happens in our life so that our physical resources weaken. But our spiritual resources should never weaken; there should never be what the modern language calls burnout, when one suddenly turns off the service one carries out. It is the saddest thing that may happen to a church minister. God grant that none of us may ever experience these moments of which today’s clergy sometimes complain.

The Lord, giving us strength for priestly service, always gives us an opportunity for communicating with Him through prayer, through the holy Eucharist, for partaking of the Holy Mysteries of Christ. It is what gives us strength to carry out our service.

I would like to cordially thank His Holiness Patriarch Kirill of Moscow and All Russia, who over a quarter century ago called me to his team and whose helper I have been all these years. I thank for trust in me, for the opportunity for me to be responsible for one of the most important spheres of church work – external church relations. I rejoice today in having beside me today the staff of the Department for External Church Relations.

I would like to thank cordially through you, dear Metropolitan Niphon, His Beatitude Patriarch John X of Antioch and All the East for the kind words he conveyed through you and for the good co-work that, in many ways thanks to you, has been established between our two Churches.

I would like to convey my cordial gratitude to His Holiness Patriarch Porfirije of Serbia through you, dear Metropolitan Anthony, and to thank you for longstanding conscientious service that you carry out strengthening bilateral relations between our Churches.

I would ask you, dear Father Seraphim to convey my gratitude to His Beatitude Rostislav, Metropolitan of the Czech Lands and Slovakia, for the kind words he addressed to me on this memorable day and to thank you for the service you carry out for the sake of strengthening relations between the Russian Orthodox Church and the Orthodox Church of the Czech Lands and Slovakia.

We are going through a difficult time when the crisis of inter-Orthodox relations has been exacerbated by the crisis that has now enveloped the whole world. We pray that the misfortune that has befallen us may soon come to an end. We pray that the Lord may grant all of us good health and salvation and success in our undertakings.

I would like to hope very much that the time of grief will soon pass and joyful times will come, when we will be able to lift up with gratitude to God our prayers of thanks for delivering us from the pernicious infection”.

Then Metropolitan Hilarion presented Patriarchal awards to the DECR staff members in connection with the 75th anniversary of the Department for External Church Relations.

Hegumen Feofan (Lukyanov), head of the Protocol Section, is awarded the Order of St. Seraphim of Sarov (3d degree).

Sister Iuliania (Zakharova), head of the DECR office, is awarded Medal of Euphrosinia of Moscow.

In acknowledgement of the diligent work for the good of the Church, Hieromonk Kirill Peregudin, DECR staff member, and Rev. Alexander Yershov, adviser to the DECR chairman, are awarded Patriarchal diploma.