Prospects for developing pilgrimage discussed at Orthodox-Catholic conference in Paris 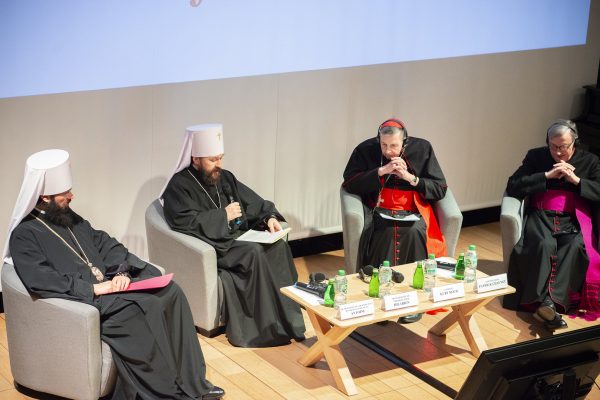 On February 12, 2022, a conference on “The Role of Common Holy Places and Pilgrimage in the Relations between the Russian Orthodox Church and the Roman Catholic Church” took place at the Russian Spiritual and Cultural Center on Brainly Embankment in Paris. It is timed to the 6th anniversary of the Havana meeting between Pope Francis of Rome and Patriarch Kirill of Moscow and All Russia.

From the side of the Russian Orthodox Church, the conference was attended by Metropolitan Hilarion, Chairman of the Department for External Church Relations of the Moscow Patriarchate; Metropolitan Anthony of Chersonesus and Western Europe, Patriarchal Exarch for Western Europe; Archimandrite Philaret (Bulekov), DECR vice-chairman; Hieromonk Stephen (Igumnov), DECR secretary for inter-Christian relations; and I. A. Nikolaev, staff member of the DECR secretariat for inter-Christian relations.

As Metropolitan Hilarion noted in his report, pilgrimage and veneration of common shrines played and continue to play a key role in the development of bilateral relations between the Russian Orthodox Church and the Roman Catholic Church.

As an example of the Orthodox and Catholic cooperation in the area of pilgrimage, the DECR Chairman cited regular Orthodox worship services at the relics of St. Nicholas in Bari with the permission of the local church authorities, the good co-work between the Russian Ecclesiastical Mission in Jerusalem and the Franciscan Custody of the Holy Land, as well as other Catholic structures in the region; the Orthodox-Catholic interaction in Spain in pilgrimages along the Way of St. Jacob to Santiago de Compostela.

Metropolitan Hilarion also spoke about the theological dimension of the notion of pilgrimage, its meaning as a micro-model of relations between the Russian Orthodox Church and the Roman Catholic Church at the current stage characteristic of the desire to strengthen further the practical cooperation.

In conclusion of his remarks, the DECR Chairman expressed a hope for further development of cooperation with the Holy See and Catholic strictures in various countries of the world, including the Catholic Church of France as the guardian of many significant shrines of the Christian world.

Remarks were also made by Cardinal Kurt Koch, Metropolitan Anthony of Chersonesus and Western Europe, and Msgr. Patrick Chauvet.

In conclusion of the conference, Metropolitan Hilarion thanked the participants for the informed discussion and expressed a hope for deepening and broadening the cooperation between the Russian Orthodox Church and the Roman Catholic Church in the sphere of pilgrimage.