Relations between Orthodox and Greek Catholics in Ukraine goes through a new stage of difficulties, the Moscow Patriarchate official believes 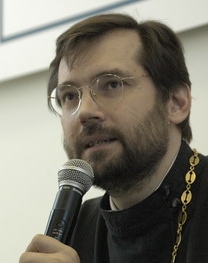 Moscow, February 7, Interfax – The Russian Orthodox Church does not entirely share the optimism of the Vatican’s representative to Russia Archbishop Ivan Yurkovich about improving relations between Orthodox believers and Uniates in Ukraine.

“In many ways, we managed to overcome difficulties in relations between Orthodox and Greek-Catholics in Ukraine that existed in early 1990-s, but we have to accept that today we face new challenges,” Secretary for Inter-Christians Relations of the Synodal Department for External Church Relations Archpriest Dimitry Sizonenko told an Interfax-Religion correspondent.

Thus he commented Yurkovich’s words published today by the NG-Religii paper. According to the apostolic nuncio “those difficulties of the early 90-s today have been overcome in many ways and today there are many contacts, especially of personal and informal character, between the two Churches.”

The Moscow Patriarchate representative says that the Primate of the Ukrainian Orthodox Church “not without grounds is concerned with the attempts of the Greek Catholic Church to set up and develop its structures in regions where Orthodox believers make a majority.”

The interviewee of the agency said that in their speeches the UGCC official representatives said they were striving to reach unity among Orthodox believers in Ukraine, “but in practice they do things aimed at reaching the contrary result.”

As an example, the priest pointed out to the UGCC head Archbishop Svyatoslav Shevchuk’s recent statement when he said that they accept the Baptism carried out in churches of the Kiev Patriarchate not recognized in Orthodox world.

At first glance, Father Dimitry said, this statement did not contain anything new as since St.Augustine’s times the Roman Church has based on the teaching that the Sacrament of Baptism cannot be repeated and accepted any Baptism held observing certain conditions.

“However, in context of the current Ukrainian situation it sounds only as a witness to their interest in strengthening positions of shismatics,” the Moscow Patriarchate representative said.