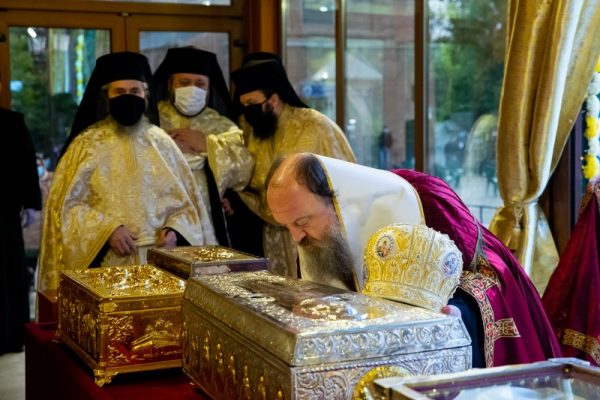 Marking the beginning of a three-day celebration in honour of Bucharest’s Patron Saint, four priests led by a bishop carried the relics of Saint Demetrios the New outside the patriarchal cathedral during a small procession on Sunday morning.

The reliquary was placed in a baldachin next to the cathedral where pilgrims from Bucharest are expected to come and offer prayers to the Saint who delivered the city from plague several times.

“It has been almost two and a half centuries since the relics of Saint Demetrios were brought to the metropolitan cathedral,” noted the assistant bishop Timotei of Prahova on Oct. 25.

“If we look carefully at various important places in the Christian world, we notice that God’s saints have chosen certain places for the piety of rulers, great boyars, and the people. This was also the case during the time of the pious Metropolitan Gregory II, who, together with a lover of holy places and relics of saints, Hagi Dimitrie, made it possible for the relics of St. Demetrios to remain in Bucharest on their way to Kiev.”

“On his feast day, but also on the other days, St. Demetrios urges us to keep the faith and the holy traditions of this Romanian land.”

“He reminds the people of Bucharest and everyone else that he presented their prayers to the Most Merciful God in time of trial, so that St. Demetrios came in time to be considered the protector of the city of Bucharest, His Holiness told Radio Trinitas.

Bucharesters will also have the opportunity to venerate the relics of Saint Stylianos of Paphlagonia, who is considered the protector of children.

Due to the coronavirus pandemic, this year’s celebrations of Saint Demetrios the New were reduced to three days. Only people from Bucharest are allowed to venerate the Saint’s holy relics respecting strict social-distancing measures.