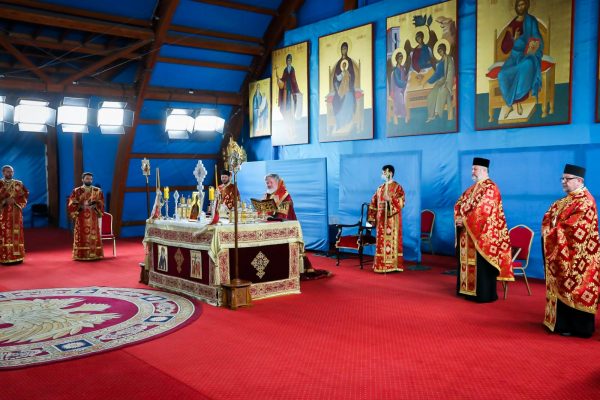 During the all-night vigil service held in honour of St. Demetrios the Myrrh-gusher, a great martyr of the 4th century, the Patriarchal Auxiliary Bishop Varlaam of Ploieşti spoke about the current persecutions against Christians and stressed that Christianity is the most persecuted religion in the world.

“Usually when we talk about persecution we refer to the persecution in the Roman Empire, but today we witness the information circulating on all news channels about a lot of Christians who are beheaded, burned alive, their property and the churches in which they worship are blown up in many lands where the Church of Christ is being persecuted.”

“According to statistics from organizations that observe religious freedom globally, the most persecuted religion in the world is the Christian religion. More than 90% of those who suffer from religious reasons are Christians. We see here the fulfilment of Christ’s warning words that in the world we will face this envious attitude, full of wickedness and vengeance,” said the patriarchal auxiliary bishop at the all-night vigil held on Sunday at the Patriarchate.

His Grace Bishop Varlaam of Ploiesti recalled the hopeful words of the Saviour Jesus Christ: “In this world, you will have trouble. But take heart! I have overcome the world.”

His Grace briefed the difficult times the Church went through and came out victorious.

“The multitude of Christians fought empty-handed with the strongest empire, the Roman Empire. Then for almost a century they fought in Soviet Russia and for half a century in communist countries with the most odious anti-Christian ideology, and each time the Church came out strong according to the words of a second-century Western theologian: “The blood of martyrs is the seed of Christians.”

Bishop Varlaam summarized the life of St. Demetrios, the governor of Thessalonica, who “voluntarily renounced the high dignities of this world, being a young man of about 30-35 years when he died paying with his blood his perfect faith in the Saviour Jesus Christ who gave His own blood for those who would believe in Him.”

Bishop Varlaam urged everyone to follow the example of St. Demetrios in faith and to be witnesses of Christ in every moment of our lives.

“Remembering the bright life and the heroic end of St. Demetrios the Myrrh-gusher, let us also encourage ourselves in these times of trial in which even in Christian countries Churches are set on fire, crosses are desecrated and Christians limited to manifest their faith in many ways.”

“Let us also encourage ourselves to be confessors of the faith with the conviction that God, who promised the martyrs the crown of life, will also offer it to us on the condition that we make this confession to the end.”