Source: Basilica.ro
On November 29, the Holy Synod of the Patriarchate of Constantinople announced its decision to glorify among the saints Schema-Elder John of Valaam (1873-1958) at the proposal of the Finnish Orthodox Church.
Aurelian Iftimiu | 24 October 2019 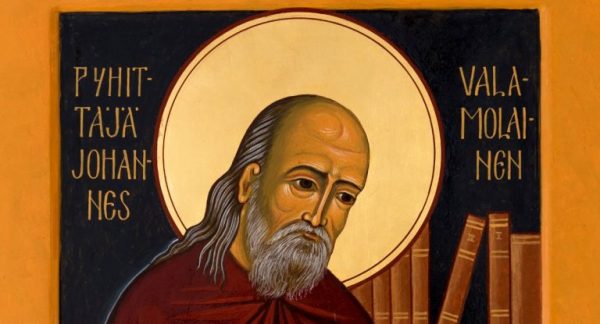 The liturgical proclamation of this glorification was celebrated this year on June 1 at the Holy Transfiguration-New Valaam Monastery in Heinävesi by Metropolitan Leo of Helsinki and All Finland.

Now the relics of the new saint have been exhumed and will be available for the faithful to venerate, reports the site of the Finnish Orthodox Church.

Upon request of the Kuopio and Karelia Diocese of the Finnish Church, the Department of State Authorities in Eastern Finland issued a permit on October 4 for the opening of the grave of St. John of Valaam and the placing of his holy relics in a reliquary in the Church of the Transfiguration of the Lord at New Valaam Monastery.

According to Finnish law, permission for exhumations can only be granted for special reasons. The Department’s decision sets an important precedent, as this is the first time a permit was issued based on the fact of the canonization of a saint and the Orthodox tradition of venerating relics.

The diocesan appeal referred to the the Finnish law on the freedom of religion, noting that the veneration of relics corresponds to the free confession of faith. In response, the Department referred to St. John’s canonization, the fact that he belonged to the Orthodox Church, and the placing of his relics for public veneration as weighty reasons to grant the appeal.

With the blessing of Metropolitan Arseny of Kuopio and Karelia, St. John’s grave at New Valaam was opened on Friday, October 18, with the participation of the abbot and brethren of the monastery, a member of the Commission for the Canonization of Saints, a restorer at the Valaam workshops, and a representative of the health services.

“The saint’s remains were easily found where his gravestone was. A large silver cross from his monastic paraman and part of his monastic leather belt were also found,” said Abbot Sergei.

St. John’s relics were then washed with diluted white wine and rose water, according to Orthodox tradition. Once the relics dry, they will be clothed in schema vestments and placed in a reliquary.

They will then be transferred the monastery’s main church during a procession on Friday, November 8, followed by the All-Night Vigil. The Divine Liturgy will be served the next morning, after which the relics will be place in their designated spot in the church.