Source: Basilica.ro
A Greek Orthodox burial was finally given to the remains of 193 Greek soldiers who died in Albania during the Greek-Italian war in 1940-41, Greek City Times reports.
Sorin Ioniţe | 25 November 2019 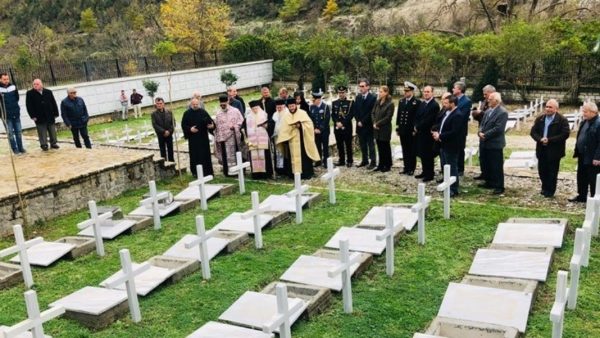 After 79 years, the bones of the soldiers who lost their lives while fighting for their country were covered with the Greek flag and placed in their own ossuary.

The emotional service took place on Tuesday at the military cemetery of Kleisoura, in the Albanian region of Premet, announced the Greek Foreign Ministry.

Metropolitan Dimitrios of Gjirokaster conducted the memorial service, and in attendance was Greek Ambassador to Tirana Sofia Filippidou, head of the joint Greek-Albanian experts committee for the search and identification of Greek soldiers’ remains, Air Chief Marshal Constantine Agos, and Greek and Albanian members of the committee, local government officials and members of the Greek minority in Albania.

During the Greek-Italian war a total of 8,500 Greek soldiers died in Albania, the greatest number died at the battles of Kleisoura and Premet, nearby.

The soldiers’ bones, many of which were collected from nearby hills and ravines at the town and mountain pass of Kelcyre, were finally given a farewell by the Greek Orthodox church.