Remembering and Sharing Our Baptism 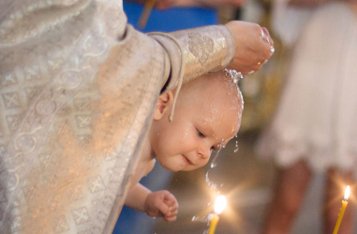 Christ is Risen!  Indeed He is Risen!

John 2:  Jesus turns water into wine at the wedding of Cana.

John 3:  Christ speaks of a New Birth born of Water and the Spirit

John 4:  The Samaritan Woman at the well speaks to Christ about Living Water

John 5:  The Paralytic is healed at the Sheep’s Pool

John 6:  Jesus walks on the surface of the Water

John 9:  A Man born blind is healed by Jesus after washing at the pool of Siloam

The book of John which we are reading during this time in the Liturgies, as well as the Sundays of this festal time, are all pointing to one very important theme that connects them all to Pascha:  The Life-Giving Waters of Baptism!

In the ancient Church and even today, many Orthodox Christians are brought into the Church on the weekend of Pascha!  They would leave the baptistry or river, and joyfully go into the Liturgy of Holy Saturday and Pascha, while the chanters sing: “As many as have been baptized into Christ, have put on Christ!”

Baptism and Pascha have always been intricately linked, and for a very important reason!  We are given our first taste of that reason on the Sunday of the Paralytic.  We hear the story of a man who spent 38 years of his life, unable to do anything for himself.  He spent his days hoping that there would be some kind soul who would help him get into the pool, when the angels stirred the waters, so that he could be healed.  After a lifetime of waiting, our Lord finally came!

Jesus asked the paralytic point blank: “Do you want to be healed?”.  This poor man who had suffered for so long response was: “I have no man…no man to put me into the pool while the waters are stirred…”.  The paralytic, who had lived patiently with this infirmity for 38 years, didn’t just need a man, he needed THE MAN, the Son of God, to come and to set him free of his afflictions…and to give him new life!

In a very real way, this is what baptism does to us!  But when we spend so much time out in the midst of the world, we forget about this new life that we have been given.  We spend our days hunched over like the paralytic, staring at the material world, and forgetting that our eyes were placed towards the top of our bodies because mankind was meant to look forward towards eternity, and above towards the heavens.

The Church gives us these Sunday reminders after Holy Pascha to help us remember our baptism.  We are called to remember “Whom We have Put On” on that transformative day that we became a Christian.

Baptism and a New Life in Christ is a tremendous gift, which is why the Church never hesitated to baptize infants from the very beginning.  Just because we think a child doesn’t have the cognizant ability to understand the gift of new life, doesn’t mean we withhold the gift!   Whether we received the gift at infancy, or whether we came to the Orthodox Church at a point later in life, we have the responsibility to not keep this life to ourselves, but rather share it with all those who we come into contact with.

When the paralytic was healed (even though it is somewhat controversial) what did he do?  He went and told others of the gift that He had been given!  We will see this play out as well in the next few weeks, just like it does all throughout scripture when people encounter our Lord!

The Samaritan Woman after her conversation with Jesus, went into the town and said:  “Come, see a man who told me all things I ever did.  Could this be the Christ?”.  Likewise the Blind Man went and told others about the man who had given him sight!  The entire book of Acts that we have been reading since Pascha tells the actions that the Disciples took after they had received the Gift of the Holy Spirit!  They went from being timid believers in hiding to bold proclaimers of Grace to the World!  These Sundays are telling us that it isn’t enough that we remember our baptism.  We have to go and share this new life with others!

One of the common sayings we hear from catechumens who are brought into the Gift of the Church is:  “I wish I would have known about this sooner…”.  How many more of our friends, our families, and even complete strangers are out there that have been thirsting for what we have all had the tremendous blessing to be given?

Remember Your Baptism!  Go and Tell Others about this Gift that you have received!  Share this Grace with all you come into contact with.  May God heal us all from any paralysis that stops us from doing so, allowing us once again to lift up our eyes to the heavens, which is where our focus was always meant to be!