Source: No Other Foundation
Archpriest Lawrence Farley | 12 May 2022 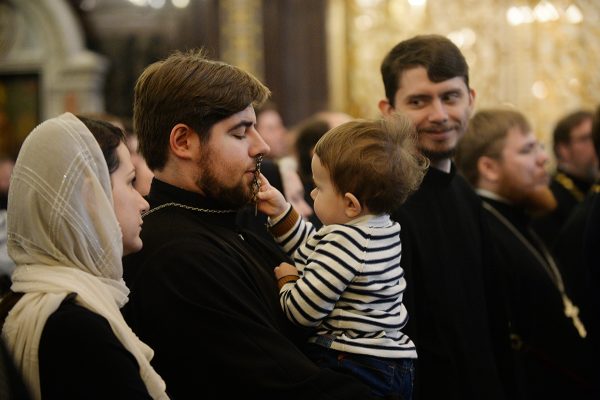 In a recent edition of the Biblical Archaeology Review there was an article provocatively entitled “Jesus Found in Ancient Arabia”.  The title is perhaps a touch misleading, because it focuses not upon Jesus Himself being found in Arabia, but upon early archaeological traces of Christian communities found there.  But the title is more significant than it knows, for those communities did indeed consist of the presence of Jesus Himself in Arabia during the time when the Church flourished there.

The essence of the Church consists of the presence of Jesus.  Through the gatherings of Christians in Arabia, Jesus was indeed found alive and living there—and also in Thessalonica, Corinth, Rome, and Philippi.  And later He turned up in Moscow, London, and New York.  This is because Jesus promised to show up and be present wherever two or more of His disciples gathered together in His Name (Matthew 18:20).  This is why St. Paul repeatedly referred to the Church (literally, the gathering or assembly; Greek the ἐκκλησία/ ekklesia) as “the body of Christ”.

This description was not simply one metaphor among many (i.e. church as a household or a vine or the city of God), but the main and controlling metaphor to describe the reality of the Church.  Just as one lives, is present, and works through one’s body, so Jesus lives, is present, and works through the gathering of Christians whenever they gather in His Name.  That is why St. Paul makes the astonishing claim that the Church is “the fullness of Christ”, the One who “fills all in all” (Ephesians 1:23).

This is the fundamental fact about the Church, though it is easy to lose track of it.  Outsiders not unnaturally view the Church as an organization, a group which interacts with the wider society, which makes pronouncements through its officers, and which holds meetings for the benefit of those who belong to the organization (i.e. “church services”).  Even those inside the Church may view the Church primarily as a social group to which they belong, a group whose primary purpose is to meet weekly to provide preaching and sacraments for their edification and comfort.  These outsiders and insiders view the Church primarily in a horizontal aspect, looking upon its activities from an external point of view:  the Church is an organization that does something.

In actual fact, the Church is primarily not about things that we do, but about something Christ does, and it should be viewed according to a vertical aspect.  When we form a gathering every week, an ἐκκλησία, He appears in our midst.  The Church’s catholic and international unity does not consist of the fact that the various congregations that gather belong to the same organization (like individual McDonald’s restaurants belonging to the same corporate chain), but rather the fact that the same Christ manifests Himself in the same way in these various congregations.  The baptized Christians in Thessalonica had the same experience of Christ being among them when they gathered on Sunday as did the baptized Christians in Corinth when they gathered.  That is why there were parts of one and same Church.

The Church’s unity therefore does not depend upon shared membership in an organization, but on the shared phenomena of the same Lord being among them.  Because the Lord who appeared in Thessalonica was the same Lord who appeared in Corinth, the Christians in Thessalonica and Corinth belonged to the same Church.  The Christians in those places—and throughout the world—had the same experience of Christ.  The astonishing liturgical diversity that obtained early on (which included in the very early days a different New Testament canon in different churches) only served to emphasize the unity of the geographically scattered Church.

It is important to remember how important this unity was—and how the unity revealed the Church as a new and heavenly reality.  In those days, all the Christians of a given town, village, or hamlet met in the same place, under the liturgical leadership of the same pastor and his team of elders (i.e. the bishop and his team of presbyters).  If they could not all fit in the same place on a Sunday, there might be another “overflow” group meeting elsewhere in the same village, under the liturgical leadership of one of the presbyters.  But all the Christians in the village belonged to the same group, and were served by the same bishop and his presbyters, who served no one apart from them.

Those Christians might have been a diverse lot.  They might have included people of wildly differing languages, ethnicities, backgrounds, and colours—people who before their baptism were at odds with each other (one thinks of the early Church of Antioch containing both Jews and Gentiles).  In the world the tribes to which they belonged might have been mutually hostile, existing in a state of sustained war.  But in the Church, all these tribal hostilities were transcended, as the Christians living in the same village all worshipped together and were one because of their shared weekly experience of Christ.

The peace and unity they enjoyed as members of the same local church thus witnessed to the power of Christ to transform and to manifest to the world a new way of being human.  The old human nature the Christians left behind after their baptism still existed in a state of tribal warfare.  The unity among the Christians who came from warring tribes revealed that a new nature was now available to the world through Christ.  That is what the Creed means when it proclaims “one baptism for the remission of sins”:  all who have been baptized experience one and same Christ, wherever they were baptized and wherever they live.

This fundamental fact about the essential nature of the Church is today being obscured in two ways.

First of all, it is obscured by almost exclusive emphasis on the Church’s organizational nature at the expense of emphasis on its phenomenological/ spiritual nature.  Online discussion of church topics, for example, focuses almost exclusively upon power structure, jurisdictional rights, canon law, budgets, the money sent to the diocesan administration, and other institutional elements.  The result is that a valid concern for the Church’s horizontal reality effectively swallows up its appreciation of the vertical.

Because our experience of Church no longer consists of all the Orthodox in a town or hamlet gathering together as one under their bishop/ his presbyteral colleagues, we more easily imagine that the essence of the Church is organizational, with our local parish being but one unit under the care of the distant bishop, just another unit within the overall power structure.  We look upon the local Eucharistic gathering not so much as the assembly of all the diverse elements in the town becoming one through the manifested presence of Christ, but more as another cog in the jurisdictional machine.  The “machine”, the diocese (itself a part of a larger jurisdictional machine), consists of many parishes, and the main function of the parish is to keep the machine functioning so that the parish can meet the spiritual needs of its members.  The vision of the parish as a union of diverse members finding their unity in the manifested presence of Christ is all but eclipsed.  A return to the original model of bishops/ clergy as local leaders would help the recovery of the vision of the parish as the locus of Christ’s transforming presence.

Secondly, the fundamental fact about the Church’s essential nature is obscured by its division into ethnic groups and coteries.  In fact, such a system of gathering according to ethnic affiliation overthrows it entirely.  Christ’s power to transform and create a new kind of humanity is revealed when differing ethnicities who were at war with each other now find peace within the same community.  Ukrainians and Russians, English and Irish, Greeks and Macedonians, Serbs and Croats—all groups which have been or still are at odds with each other can now co-exist in mutual love because Christ who is in their midst allows them to transcend their earthly tribalisms.  To have separate gatherings for the Greeks and the Macedonians, for the Ukrainians and the Russians, etc. etc. etc. defeats the entire purpose, and gives the lie to our professed catholicity (which our Roman Catholic friends are not slow to point out).

That is why the original model deliberately refused to have separate churches for Jews and for Gentiles, but insisted that Jew and Gentile find their unity in the same assembly.  The Church’s insistence on being organized on a geographical principle and not on an ethnic one, an insistence enshrined the canons and now almost everywhere defied, was meant to reveal the true source of our unity—i.e. a unity in Christ, not in ethnicity.  Appeal to our common loyalty to a set of doctrines or to our “inter-communion” is insufficient.  The Gospel is not that Jew or Greek can believe the same thing or share Communion, but that in Christ—i.e. in our local gatherings—there is no longer Jew or Greek (Galatians 3:28).  Organizing our churches along ethnic lines constitutes our effective denial of this truth.

Every week, when the Peace is exchanged, those who exchange it say, “Christ is in our midst!”  This is the fundamental fact about the Church’s essential nature.  It is time that we take decisive steps to obscure it no longer.