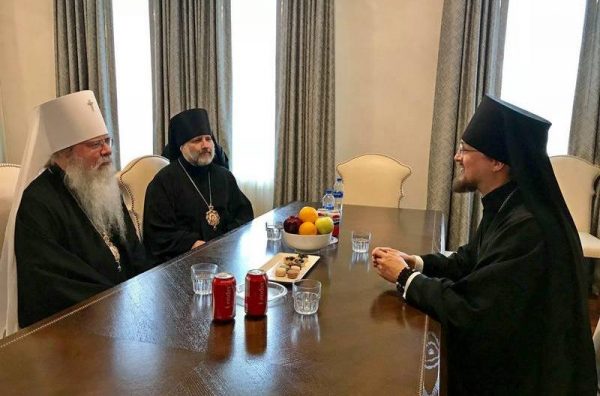 The 19th All-American Council of the Orthodox Church in America was held from July 23 6to 27, 2018, in St. Louis, Missouri. Its opening was preceded by a solemn thanksgiving presided over by His Beatitude Tikhon, Metropolitan of All America and Canada.

The theme of the 19th All-American Council, ‘For the Life of the World’, was based on the work of the same name by Protopresbyter Alexander Schmemann. The history of the writing of this book, loved by many Christians, was told to the Council by Father Alexander’s son Serge.

In his introductory speech, His Beatitude Tikhon reminded the gathering that in his numerous works, St. Tikhon the Patriarch of All Russia, when he was a bishop in North America in the period from 1897 to 1907, often called people ‘to be partakers of the Body of Christ’. His Beatitude reminded the gathering that this call is relevant in our days as well.

Metropolitan Tikhon also spoke on several urgent problems facing the Church today and reminded the Council of the Orthodox Church in America’s calling to the evangelical mission.

Bishop Flavian brought greetings to the Council on behalf of the Russian Orthodox Church and Patriarch Kirill of Moscow and All Russia. He noted in particular, ‘The Russian Orthodox Church has never weakened her communion in prayer with her beloved sister – the Orthodox Church in America. Indeed, the lives of our Sister Churches have been indissolubly tied in history. Last year we prayerfully remembered the events tracing back one hundred years – the Local Council in Moscow and the election of St. Tikhon of Moscow as Patriarch of All Russia. The efforts and achievements of St. Tikhon together with such zealots of faith and devotion as St. Herman of Alaska and St. Innocent the Metropolitan of Moscow are precious parts of our common spiritual heritage. In the days when the All-American Council is meeting, we lift up fervent prayers for the preservation and multiplication of the fruits of the salvific sowing by many Russian missionaries who sow a field of Holy Orthodoxy in the American continent. Today the Council is considering matters important for the life of Orthodox Christians. To settle them is necessary for the future of the Church of Christ in the USA. We pray that the All-Holy Spirit may guide and make wise all the participants of the Council so that they could make wise decisions’.

There were discussions and round-table conferences on a number of topics. Decisions were made concerning various aspects of the life and service of the Orthodox Church in America.

During the Council, a talk took place between Metropolitan Tikhon of All America and Canada and Bishop Flavian of Cherepovets and Belozersk. During the talk, the guest from the Russian Orthodox Church conveyed warm words of greeting to the Primate of the Orthodox Church in America and to all the participants in the All-American Council from Patriarch Kirill of Moscow and All Russia.

On July 26, the commemoration day of the Righteous Jacob Netsvetov, the enlightener of the peoples of Alaska and the first native of that land who was ordained, the Primate of the Orthodox Church in America presided over the Divine Liturgy celebrated at the Council’s assembly hall. His Beatitude was assisted by members of the Holy Synod and archpastors from Local Orthodox Churches who were the guests of the All-American Council.

According to reports at the Diocese of Cherepovets website

and web portal of the Orthodox Church in America