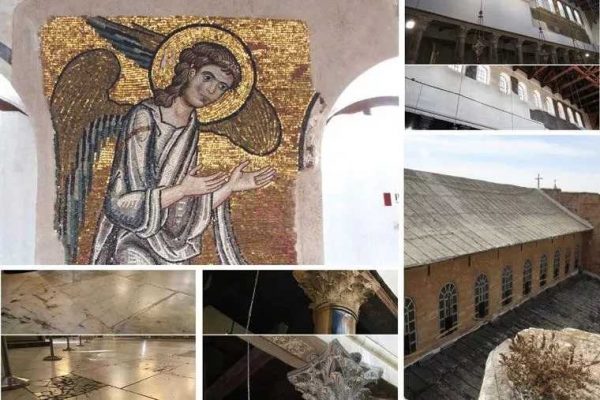 The restoration of the ancient stone church of the Nativity in Bethlehem is nearing completion, although there is still important work to be done. Due to delays caused by the COVID-19 pandemic, the project to restore this treasured church will take another year to complete.

During a recent tour of the church before Christmas, Mazen Karam, CEO of the Bethlehem Development Foundation (BDF), said the restoration has been a holy mission.

“This restoration wasn’t a choice. It was a duty. We could not allow the church to deteriorate, so it is here for the next generations,” Karam said as he entered the church, whose gold-tinted wall mosaics have been renewed to their former splendour.

The restoration “will ensure that the church will survive for at least 500 more years without major interventions, and hopefully survive another 2,000 years,” Karam said, according to National Catholic Register.

The restoration of the basilica “was a priority” to protect the church’s main entrance, according to the Palestinian Presidential Committee.

During the work, restoration specialists were able to uncover a hidden upper section of the enormous wooden eastern door.

While repairing the baptismal font, the restorers were delighted to discover an original font, carved out of stone and shaped like an Orthodox cross.

Built in 339, the church was destroyed in the sixth century by the Samaritans. Rebuilt the same century, it was greatly expanded over the years.

While it was repaired at various times over the past 1,700 years (the last major repair was in 1480), time and tens of millions of pilgrims had taken their toll.

The unstable roof, windows and walls leaked to such an extent that murals, mosaics and internal wooden beams were badly damaged. Candle soot coated the walls, obscuring the priceless mosaics, and left the church dark and gloomy.

However, before the restoration could begin, millions of dollars needed to be raised, and the three religious custodians that maintain it — the (Catholic) Custody of the Holy Land, the Greek Orthodox Patriarchate and the Armenian Orthodox Patriarchate — needed to put aside their centuries-old differences and agree to the project.