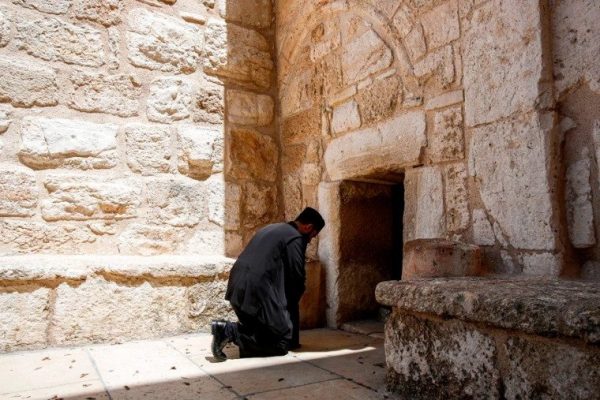 An Orthodox Christian priest prays at the entrance of the Church of the Nativity in the biblical West Bank city of Bethlehem on April 18, 2020, while the church is closed due to a lockdown imposed to stem the COVID-19 coronavirus pandemic. | AFP via Getty Images/MUSA AL SHAER

American Christians have helped in the raising of funds used to restore an ancient church in the West Bank believed to be the birth site of Jesus Christ that was once on a United Nations list for world heritage sites in danger.

The Church of the Nativity in Bethlehem is not only a popular tourist destination for Christian pilgrims visiting the Holy Land but was named a United Nations Educational, Scientific and Cultural Organization (UNESCO) World Heritage Site in 2012. It was previously listed on the UNESCO List of World Heritage in Danger due to a “poor state of conservation” before its removal in 2019.

Completed around the year 565, the church has not been majorly renovated since 1480 and was in danger of collapsing. But in recent years, the church has undergone several restoration projects to its roof, facades, mosaics and doors thanks to contributions from donors worldwide.

“The Church of the Nativity is a treasure of history and of faith,” said Mazen Karam, managing director and CEO of the Bethlehem Development Foundation, in a statement sent to The Christian Post. “We’ve made great progress and look forward to completing the work to return this treasure back to the world.”

The BDF launched a nonprofit, nongovernmental organization called the American Friends of the Bethlehem Foundation (AFBDF) in 2018. Together, the groups have raised approximately $30 million in the past eight years to restore the church. Much of that funding has come from U.S. donors.

“Christians in the United States have an enthusiastic love for the Holy City of Bethlehem,” said AFBDF President George Salem. “We are thrilled by the outpouring of support from our American friends and their commitment to help revitalize the Church of the Nativity.”

BDF and the AFBDF have helped fund restoration of the external facades, a wall mosaic, basilica doors, internal plaster, the last 11 columns of the central nave, the narthex, wooden architraves and installed lighting and smoke detection systems.

The organizations have other plans to further the project, which include consolidating the church walls against seismic activity, tiling the floor with stone and marble, restoring the stone tiles in the front yard and installing firefighting and microclimatic systems.

The ancient church was commissioned by Constantine the Great shortly after his mother Helena visited both Jerusalem and Bethlehem.

The original building was likely constructed in the 330s and was formally dedicated in 339 A.D. Approximately 200 years later, it was destroyed by fire during the Samaritan revolts and subsequently rebuilt and built new additions by Byzantine Emperor Justinian.

The main basilica of the church is maintained by the Greek Orthodox Patriarchate of Jerusalem. Situated underneath the main altar in the church is an underground space called the Grotto of the Nativity and is believed to be the place of Jesus’ birth. The precise spot where Jesus is said to have been born is encircled with a silver star set in the marble flooring.