Our American way of life has tended to mold the local church into the local religion store. It offers various programs and activities that keep everyone involved and even maximizing the “ministries” of its members. But it can also simply be a beehive of activity, none or little of which has much to do with the healing of the soul.
Archpriest Stephen Freeman | 12 October 2011

If you read across Orthodox books that center on the issue of Personhood – a common theme becomes visible. Our fall and our brokenness leave us vulnerable, even in our religious efforts, to the development of a “false self” something quite other than the wholeness of true Personhood. Indeed, religion might be more than just a little vulnerable to this – it may be one of the best ways to pursue a false mode of existence. It should be quickly added that most of our activities contribute to this false self – for it is simply another way in which our sinfulness manifests itself. The movement from false to true self is another way of describing the work of salvation that is wrought in us through grace. 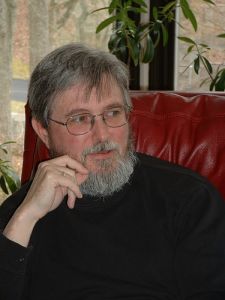 The distinctions being made between “false” and “true” are not about identities: not a matter of my being “Bill” or “George.” It instead a distinction being made between a distorted and improper relation with God and the world around me and a whole and proper relation with God and the world around me. Through any number of life experiences we find ourselves wounded and broken. Our love becomes distorted such that we do not love as we ought. Our feelings (in the very largest and all-encompassing sense of the word) become distorted. We do not love what and who we should love in they way they should be loved. The whole range of emotions from hate, anger, joy, love, etc., all become distorted. Thus it seems that often the longer we live the more damage we receive and inflict.

The healing of the self includes the healing of the whole self. Though purification, illumination and deification (or the various ways of describing the ascetical and spiritual life of the Orthodox Christian) our emotions are restored to their proper function. We are able to love, to be thankful, to have anger even hate (in their proper sense – meaning however whatever is actually in the image of God). We do what is right (not as measured by some abstract set of principles or objective set of rules) but as is measured by the will of God: “whoever does the will of my Father which is in heaven” (Matthew 7:21).

The difficulty in all of this is that it describes something dynamic, that is happening in the life of a believer. It is not static, such that it is finished before it is finished. Instead it is something of a roadmap, and looks at what is going on in the life of salvation and is a way of describing the relative merits of differing things. It is a way of saying what is important and what is at stake.

It is quite possible for a local church (as in a local parish, though we could be describing the more accurate sense of “local” church and mean the Orthodox Church in America or the Russian Orthodox Church, etc.) to go about what looks like the work of the Church, and in fact not be doing the work of the Church. The sacraments may be present (these are utterly essential aspects of the life of the Church). Fr. Alexander Schmemann is quoted as having said: “The Church is not an institution that has mysteries; it is a Mystery that has institutions. But it is quite possible to put things the other way around, and instead of serving the salvation of each member, be serving the creation and the fostering of the false self.

Our American way of life has tended to mold the local church into the local religion store. It offers various programs and activities that keep everyone involved and even maximizing the “ministries” of its members. But it can also simply be a beehive of activity, none or little of which has much to do with the healing of the soul.

In every activity of the Church, whether it is liturgical, or educational, or building buildings, what have you, each activity should serve for the healing of the soul and the nurture of the true self. If not, then the Church has simply become one more secular activity that is destroying true life rather than fostering it.

So, what is at stake? Everything. These things are easy to get wrong, and we doubtless fail at many of them most of the time. What is to be done? First we pray and seek to live our lives as though we believed in God. And not only that we believe in God, but that the goal of our life is our mystical union with Him and one another. We can engage in any Godly activity, but it will be seen as a Godly activity, if and only if, its goal is true union with God and one another. This will be marked by love, freedom, indeed the fruit of the Spirit. It may not be the most efficient of organizations (efficiency is not a criteria of Godly judgment), but if it is moving forward in this work of healing in whatever it is doing, then it is doing the work of God and He will be glorified.

Another specific activity, deeply related to this false and true self, is the knowledge of God, and all that we speak of when we say, “doctrine.” Part of the argument of St. Gregory Palamas, against those who argued for a different manner of knowing God, was his insistence on the experiential character of the proper knowledge of God. Thus when we know God properly, we know Him as Person, not as object or topic. Someone may know all of the dogmatic formulas such that they can repeat them with no trouble, or even quickly analyze a statement as somehow being contrary to the doctrine of the Church, and yet know all of this in a way that is not proper. They simply become experts, like someone studying for a game show. This is an activity that fosters the false self, and may be more dangerous than many, because the person involved can suffer under the delusion that because they “know” all of the true facts, they actually know the truth, when they do not.

In the liturgy we sing: “We have seen the true Light, we have received the heavenly Spirit; we have found the true faith, worshiping the undivided Trinity, who has saved us.” This in no way means, “We now have the true facts.” Anyone could have the true facts. This is almost nothing. The hymn in the liturgy refers to a living relationship that is healing us a whole persons. There is no triumphalism in this hymn whatsover (if there is then one is singing from the “false self”). Instead, there is simple gratitude. We give thanks because God has done this for us (who in no way deserved what has been done).

Thus the Orthodox life should always be marked by a knowledge of God (frequently beyond expression even though it agrees with the doctrine as it has been revealed). But it is not doctrine I wish to know, but Him Whom the doctrine reveals. Again, everything is at stake.

“Not guilty by reason of insanity.” Such a ruling in a modern court-of-law makes complete sense, even if…

I was flying into Denver a year or so back to speak at a conference. Seated next to…

Most viewed articles
Getting an Early Start on a Late Pascha131
The Light of Epiphany99
Fleeing To The Desert, A Little Bit98
1 in 4 Youth Can’t Cope in Pandemic, Christian Mental Health Expert Says Peer Support Is Key62
2021 March For Life Becomes Virtual Event Over Safety Concerns Near Capitol and COVID Restrictions58
Patriarch Kirill Speaks on the Power of Epiphany Holy Water58
El Mundo Includes Russian Orthodox Cathedral in the Six Most Beautiful Churches of Madrid50
The Worst Year Ever – Or Was It?1
Most popular authors
Pravmir.com team170
Archpriest Thaddaeus Hardenbrook131
Priest Luke A. Veronis99
Archpriest Michael Gillis98
Andrea Morris58
Archpriest Geoffrey Korz1