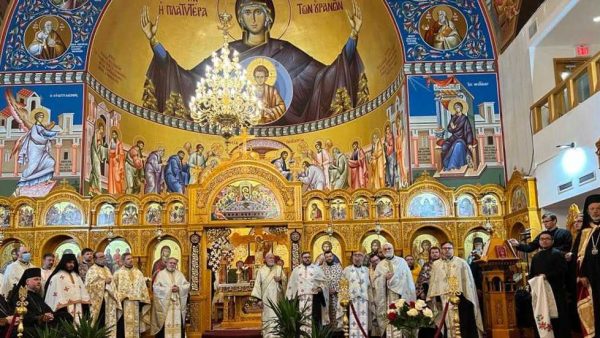 Representatives of the Romanian Orthodox Diocese of Canada participated last Sunday in the Pan-Orthodox Vespers organized at the „St. Pantelimon” Greek Parish in Markham, Toronto, for the Sunday of Orthodoxy.

Archbishop Sotirios of the Greek Archdiocese of Canada presided over the Vespers. He was joined in service by approximately 30 clerics of different Orthodox canonical jurisdictions from the Greater Toronto Area.

After the religious service, the Greek hierarch participated in the traditional procession with icons. The Troparion of Orthodoxy was sung in many languages. In Romanian it was sung by Tudor Dragomir, Protopsalter of the “All Saints” Parish in Scarborough, Ontario.

Special prayers were said for peace in Ukraine and around the world.

Father Bohdan Hladio, president of the Clergy Association Brotherly, thanked the priests and the faithful for their participation, as well as Archbishop Sotiriors, Bishop Andriy, Auxiliary-bishop Athenagoras and Father Nikodimos Kodogeorgakis, the parish priest of Markham community.