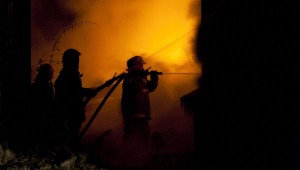 MOSCOW, March 10 (RIA Novosti) – Russian Orthodox priests will soon join the Emergencies Ministry’s brigades of psychologists in their work at the sites of accidents and natural disasters, the Moscow Patriarchate reported.

Under the new agreement, the ministry will inform of new disasters the assistance team of specially trained clergymen, sisters of mercy and lay volunteers affiliated with the Church, while a special aircraft will fly them to a response center, the patriarchate reported on Saturday.

The priests will operate as part of the response brigades of the center, which is headed by former Emergencies Minister Sergei Shoigu’s daughter, Yulia.

It was not immediately clear whether representatives of any other confessions would be also allowed to assist people at disaster sites.

According to the Moscow Patriarchate, over 8,000 volunteers of the Orthodox Church helped those hit by the 2010 wildfires, while priests provided needed psychological assistance soon after the 2011 terrorist bombing at Domodedovo airport.

Most viewed articles
How Can We Evangelize Today?202
Five Signs of a Modern Pharisee190
Trial of Politician Defending Traditional Marriage Begins in Finland100
Medical Workers Walk 1.5 Km Through Snowdrifts and Save the Life of a 100-Year-Old Woman97
Bad Habits And Their Cure71
Grains of Wisdom and Piety Book Published68
ROC Holy Synod Discusses the Announcement of the Patriarchate of Alexandria Concerning the Establishment of the ROC Patriarchal Exarchate of Africa57
Patriarch Daniel prays for Romania’s national unity, peaceful coexistence and dignified cooperation with other peoples36
150th anniversary of the establishment of the North American diocesan see in San Francisco31
Most popular authors
Pravmir.com team353
Frederica Matthewes-Green202
Archimandrite Markell (Pavuk)190
Saint Nicodemus the Hagiorite71
Aurelian Iftimiu36