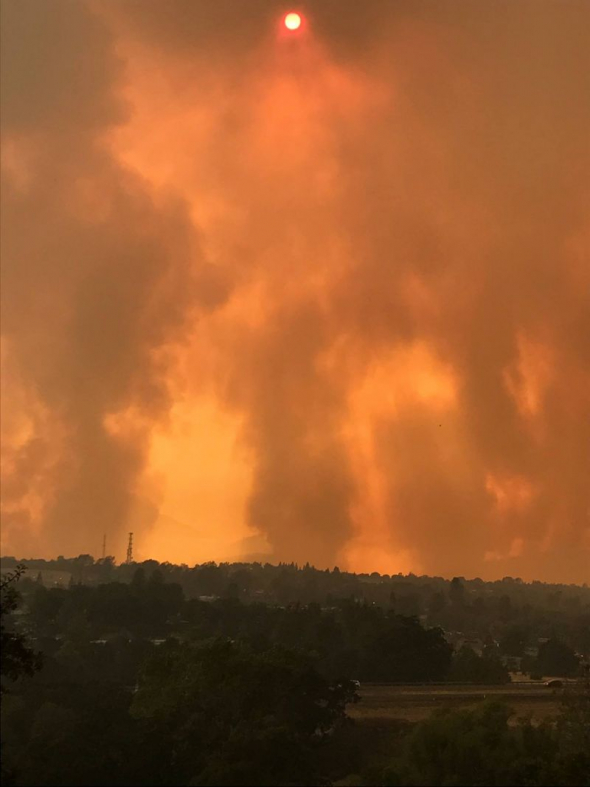 (PHOTO: BRANDON FARRIS) An orange horizon in west Redding, California as the Carr fire blazes across the region on July 26, 2018.

Northern California is presently besieged by a giant wildfire, complete with “firenados,” a blaze that is being counted as among the 10 worst fires in California’s history.

The Carr fire, which began in Shasta county near Redding last week, has consumed more than 103,000 acres of land and has continued to grow as the land is tinderbox dry. Reports indicate that residents have never seen anything like this and are describing the scene as “apocalyptic.”

At least 723 homes have been destroyed, six people have reportedly died and others remain missing.

The home of Redding residents Judah and Krystal Gowan was completely burned to the ground, and they were caught off guard by the fire’s rapid movement.

On Thursday, they spoke to the fire crew in their neighborhood near Keswick dam, and were told that their house should be safe. But around two hours later, they received a call from a family member in the area saying they had to get out immediately or they would be unable to escape at all.

“I was petrified,” Krystal Gowan said in a Monday interview with The Christian Post.

“I have two toddlers, my parents live with me, plus cats and dogs. Within the span of five minutes we grabbed exactly that list, shoved everyone in the car, and we ran. As we drove out of our gated community the fire trucks were entering and using loudspeakers for us to exit.”

As they left, they saw several homes on fire and the blaze was surrounding the whole community. Gowan heard later that others were taken out of the neighborhood via helicopter. She told CP she took her first shower last night and expected the ash she felt she was covered in to pour into the drain, but noted the water was remarkably clear.

“And I thought, ‘this is God saying He’s got us, He’s already taken care of this,'” Gowan recounted.

Relief efforts are underway and prayers are being sent from around the world.