Russian Gethsemane Prayerfully Marks the Memory of the Martyrs of Alapaevsk 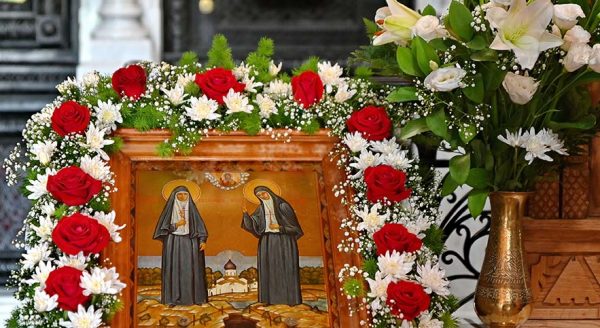 In the church of St Mary Magdalene in the Garden of Gethsemane, Jerusalem, where the relics of the Holy Martyrs Grand Duchess Elisabeth Feodorovna and Nun Barbara rest, the anniversary of their martyrdom, July 5/18, was solemnly celebrated.

The Chief of the Russian Ecclesiastical Mission, Archimandrite Roman (Krassovsky), along with the clergy of the monastery, prayerfully led the celebrations. The sisters of the monastery sang and read the service composed by Metropolitan Mark (Arndt) in honor of the saints.

At Divine Liturgy, the abbess of the convent, Mother Elisabeth (Smelic), who celebrates her saint’s day on this day was especially commemorated. Nun Barbara, a sister of the monastery, was also prayerfully remembered on the occasion of her namesday.

After Liturgy, a prayer service was served at the relics of St Elizabeth. Archimandrite Roman (Krassovsky), Chief of the Russian Ecclesiastical Mission in Jerusalem, congratulated Mother Elisabeth and Many Years was sung.