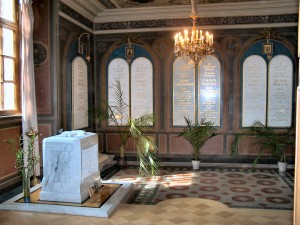 Moscow, July 17, Interfax – The Russian Investigative Committee does not doubt the authenticity of the royal family remains found near Yekaterinburg and it is ready to answer every question of the Russian Orthodox Church.

“No new data, which might have called our research into question, has been uncovered,” senior investigator of the Russian Investigative Committee’s Main Forensic Department Vladimir Solovyov, who investigated the murder of the royal family, toldInterfax on Wednesday.

The family of the last Russian emperor, Nicholas II, was executed in the Urals 95 years ago, in the early morning hours of July 17, 1918.

“Numerous conferences have been held since 2008 when our report was published but no one has ever questioned the scientific integrity of our inquiry,” Solovyov said.

“It is our opinion, based on scientific methods, that the remains actually belong to members of the royal family,” the Investigative Committee representative said.

He added that the royal family murder case would not be completely closed until the burial of the remains of Prince Alexey and his sister Maria.

“The Church claims it has certain qualms about our studies. It would be best to have a civilized discussion about any problems with the clerics. We are ready to listen to their objections and to answer their questions. There has been no joint work between church scholars and the scientists who examined the remains,” Solovyov said.

“I would like to meet with representatives of the Moscow Patriarchate and have a civilized discussion on every issue. It is an outrage that human remains are still be stored in the archives instead of being buried,” Solovyov said about the remains of Prince Alexey and Princess Maria.

Meanwhile, the House of Romanov, led by Grand Duchess of Russia Marina Vladimirovna, said it was not prepared to recognize the authenticity of the remains found in Yekaterinburg. “The head of the Russian royal family, Grand Duchess Marina Vladimirovna, fully shares the position of the Russian Orthodox Church. Neither the investigators nor the Prosecutor General’s Office have given complete, coherent answers to the ten questions of the Russian Orthodox Church,” the House of Romanov lawyer, German Lukyanov, told Interfax on Wednesday.

“It would be premature to put the matter to rest, especially given that weighty evidence has been found abroad and may shed light on the actual state of affairs,” Lukyanov said.

The notes of investigator Nikolay Sokolov, who was looking into the murder of the last Russian emperor and his family in 1919 on the orders of Admiral Kolchak, were found during the reconstruction of the Job the Long-Suffering Church in Brussels, he said. The House of Romanov expects an analysis of the papers found in Brussels to put an end to the dispute over the authenticity of the royal family remains.

The Russian Investigative Committee finished the inquiry into the criminal case of the death of the family of Nicholas II in January 2011. The remains were proclaimed genuine.

The Russian Orthodox Church and the House of Romanov continue to deny the authenticity of the remains.