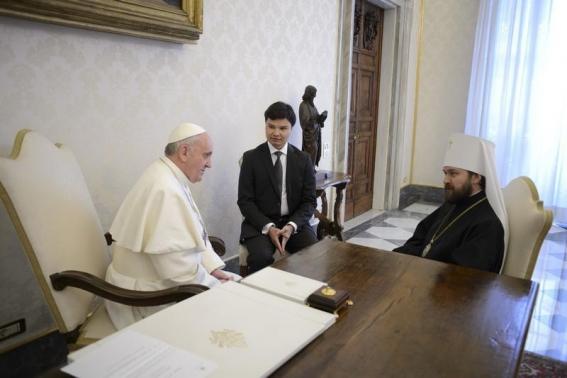 Pope Francis (L) talks with Metropolitan Hilarion, the foreign minister of the Russian Orthodox Church, during a private meeting at the Vatican March 20, 2013.

(Reuters) – When Pope Francis meets the spiritual head of the world’s Orthodox Christians next week, the speeches and symbolism will focus on how these ancient western and eastern wings of Christianity want to come closer together.

After almost a millennium apart, however, the key to the elusive unity they seek does not lie in Jerusalem, where the Catholic pope and Ecumenical Patriarch Bartholomew will embrace on May 25. If anywhere, that key lies in Moscow.

The Russian Orthodox Church (ROC), by far the largest church in the Orthodox world and increasingly influential at home and abroad, has long been wary of the closer ties Francis and Bartholomew want to work towards.

Its opposition has only stiffened in recent months amid the crisis in Ukraine, where the political standoff between Russia and Europe has deepened tensions between the Moscow Patriarchate and three competing churches, one of them linked to the Vatican which Moscow accuses of trying to woo away its worshippers.

“All these unfortunate events … take us back to the situation when Catholics and Orthodox didn’t consider themselves as allies but as enemies,” said Metropolitan Hilarion, the ROC’s “foreign minister” at the unusually young age of 47.

The Ukrainian Greek Catholic Church, which supports pro-European movements there rather than the pro-Russian ones the ROC favors, “is becoming once again … a huge obstacle for any progress in our bilateral relations,” he told Reuters in an interview in Moscow’s Danilov Monastery.

The dream of overcoming the Great Schism of 1054, one of European history’s greatest splits, is still far off, but both sides try to work together to promote Christian values and avoid the disunity Jesus warned his disciples against.

In recent decades, theologians have met often to seek common ground. Bringing churches closer means making possible changes on everything from the authority of their leaders to the dates of feast days. The Vatican and the Ecumenical Patriarchate are searching for ways to do what they can to find agreement.

But the Russian church, with 165 million of the world’s 250 million Orthodox, wants change only on its own terms.

Its close ties to President Vladimir Putin assure it considerable influence. The Russian state and generous donors have helped it restore or build 25,000 churches in Russia and over 60 countries in the last 25 years.

By contrast, Bartholomew has a prestigious post dating back to when his base in Istanbul was Constantinople and capital of the Byzantine Empire, but his local church has only 3,000 members and Turkey keeps tight limits on it.

Hilarion stressed that Moscow and Rome had common interests in defending traditional moral values and said his two meetings with Pope Francis last year were positive.

“We even made some plans about the future,” he said in fluent English perfected during studies at Britain’s Oxford University. He gave no details.

In fact, Ukraine is only the latest reason Moscow has given in recent years to explain why it has not agreed to a meeting between the pope and its Patriarch Kirill.

But for that, Russia wants agreement on the traditional Orthodox view that the pope – whose 1.2 billion-strong flock makes up more than half of all Christianity – is simply the bishop of Rome with no world-wide authority.

The Vatican insists Rome’s ancient role as the most important of all Christian churches gives it a special status even if it is defined minimally.

The ROC also sees the Ecumenical Patriarch in a strictly limited way, saying Bartholomew can act on behalf of other Orthodox churches only if they make a formal request.

He did not ask other Orthodox for a green light to meet Francis, Hilarion said, so the meeting is less than it seems.

“It is a meeting between the pope of Rome and the head of the Orthodox Church of Constantinople,” the Moscow prelate said.

The ROC has secured its future influence by ensuring that the pan-Orthodox council in 2016 – the first in 13 centuries – will decide issues by consensus rather than the majority voting Bartholomew wanted.

The pan-Orthodox council was first proposed in the 1960s to bring the Orthodox closer together to respond to the unity call of the Catholic Church’s Second Vatican Council (1962-1965).

While now ready to hold a council, the 14 Orthodox churches still disagree on key points that could block movement towards intercommunion, common feast dates or other changes that would make unity more visible to the Catholic and Orthodox faithful.

“There must be more work among the Orthodox before we can consider bilateral Catholic-Orthodox issues,” said Nicolas Kazarian, a church historian at the Orthodox seminary of Saint Serge in Paris.

Most viewed articles
Our Lenten Journey112
The Heart of the Scriptures107
Serbian Patriarch Porfirije Gives Interview to Serbian National Television81
Patriarch Kirill Speaks on the Only Right Path79
Metropolitan Onuphry: Fasting and Prayer Are Two Wings That Help People Draw Near God66
Metropolitan Hilarion: Real People in the Virtual World of the Internet Also Need to Hear the Word of a Priest63
Reading the Bible Has Given Christians Hope During the Pandemic – Survey35
Bishop Benedict of Bistrița in Relation to Young People: I Want to Be One of Them34
Moses and the Ten Words25
Sunday of the Samaritan Woman2
Most popular authors
Pravmir.com team324
Priest Luke A. Veronis112
Frederica Mathewes-Green107
Aurelian Iftimiu34
Archpriest Lawrence Farley25