MOSCOW, December 2 (RIA Novosti) – A spokesman for the Russian Orthodox Church called for an inquiry Monday into the activities of a Russian sect that he says “imitates Orthodoxy.” 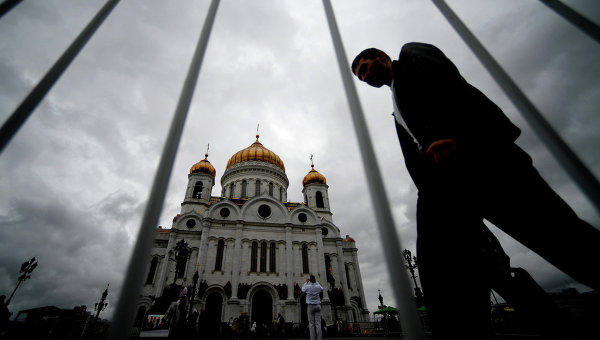 The unregistered Kuzya-the-God religious group, which experts say bears the hallmarks of a totalitarian sect, gained notoriety last week after its members allegedly attacked a Russian TV crew that was investigating its activities. An adherent of the group reportedly sprayed an unknown chemical on the team of journalists, inflicting chemical burns on some of them and damaging video equipment.

“Law enforcement agencies and society in general should look most carefully into how legitimate this group’s actions are: whether fraud, deception and the use of force against followers have taken place, and as what [type of offense] the outrageous attack on the TV crew and the use of an unknown chemical substance against it should be qualified,” said Vsevolod Chaplin, who heads the Russian Orthodox Church’s press service.

According to the Pravoslavie i Mir religious news portal, the so-called Kuzya-the-God sect was founded by 36-year-old Andrei Popov, who calls himself Kuzya in honor of his late parrot. His followers believe that Kuzya is the reincarnation of both Jesus Christ and the Virgin Mary.

“The person who heads it has styled himself as a god on numerous occasions, and before that he posed as an Orthodox priest and even a bishop,” Chaplin said. “We have said many times that this person is not a priest of the canonical Orthodox Church, and so he should be regarded as an impostor by any Orthodox Christian.”

The Russian Orthodox Church launched a crackdown on the sect when it discovered that Kuzya-the-God followers, pretending to be Orthodox monks and priests, were collecting thousands of dollars in donations at Orthodox fairs.

In 2011, the Church established a commission to oversee the numerous religious fairs that have become increasingly popular in Russia. According to the commission, Kuzya-the-God followers were collecting millions of rubles in profit at fairs on a daily basis.

Most viewed articles
On Feeling Forsaken144
Patriarch Kirill: We In No Way Question the Healing Power of the Holy Mysteries of Christ!125
Lessons from Saint Mary of Egypt124
Ethiopian Patriarch Thanks Patriarch Kirill For the Support During the Persecution96
Maronite Patriarch Thanks Russian Patriarch for His Support for Christians in the Middle East85
Food for the Journey29
The pandemic is a significant examination for us all, Transylvania Metropolitan says9
Sunday of the Samaritan Woman1
Creation in Genesis1
Athens and Jerusalem: the Role of Philosophy in Faith, with Analysis by St. Gregory Palamas1
Most popular authors
Pravmir.com team307
Archpriest John Moses (+2019)145
Justin Doty124
Dcn. Michael Schlaack30
Aurelian Iftimiu10
Eric Hyde1
Archpriest Geoffrey Korz1