Passion Week. It is the only time of the year when we forget ourselves, our duties, and our requests. In the Church’s hymnody of the Passion services from Thursday to Saturday you will not find any mention of us sinners, of our downtrodden souls, of our petitions. The contemplation of Christ engrosses everything. Our attention is focused upon Him alone.
Igumen Savva | 31 March 2010

Passion Week. It is the only time of the year when we forget ourselves, our duties, and our requests. In the Church’s hymnody of the Passion services from Thursday to Saturday you will not find any mention of us sinners, of our downtrodden souls, of our petitions. The contemplation of Christ engrosses everything. Our attention is focused upon Him alone. Therefore, for the attentive Christian, the experience of these days is a school of life in Christ and of life with Christ, which is the only true and normal condition for a Christian.

Two sorrowful and horrific actions — the path to Golgotha and the procession to the burial cave — were the objects of our contemplation these days. It is characteristic of the Divine services that they make us participants of those distant and frightful events. In the garden of Gethsemane, our eyes were blinded by torches, a youth wrapped in a cloth hid among trees, and Peter was warming himself by the fire when he was surprised by a cock crow. We peered into Pilate’s window, were surprised by the many-voiced roar of the crowd, the women of Jerusalem were wailing over the beaten Sufferer, the thief was forgiven because of the final love entrusted to the Holy One… And two old men and grief-stricken women found the final shelter for the Homeless One.

How vividly one sees the faces of Christ’s contemporaries, but He Himself is somehow mystically hidden, remaining inaccessible to this contemplation. But did not St. Isaiah foretell this: As many were astonished at Thee; His visage was so marred more than any man, and His form more than the sons of men! So shall He sprinkle many nations; the kings shall shut their mouths at Him; for that which had not been told them shall they see; and that which they had not heard shall they consider (Is. 52:14-15). Did you notice that, in the description of the suffering of the Innocent One, the Prophet does not speak a word of sympathy for Him? Why is this so? Because all our feelings are engrossed only by the awesome amazement of God’s works, which are beyond our comprehension and reveal the love of Christ, which passeth understanding (Eph. 3:19). But human love we see too well, and it too is worthy of wonder, for it is a love without hope.

We look at the Cross and the Grave from Pascha, we know too well the joy of the Resurrection, we live by it. And the solemn order of the Divine services of Passion Week, grand and mournful, but penetrated with the expectation of Pascha, its hidden joy, tinges even the Burial Shroud [Epitaphios], the last covering of the Sufferer. For us the Burial Shroud is the banner of the Resurrection and the triumph over death and slavery, the banner of freedom and unity with God. But Nicodemus and the Elder of Arimathaea, the sorrowful women, and the Mother of God were weeping tears over the bloody cloth, the modest covering of the Dead One. They saw in the Burial Shroud the clothes of the ancient patriarch Joseph which had been wept over by Jacob: For I will go down into the grave unto my son mourning”(Gen. 37:3). 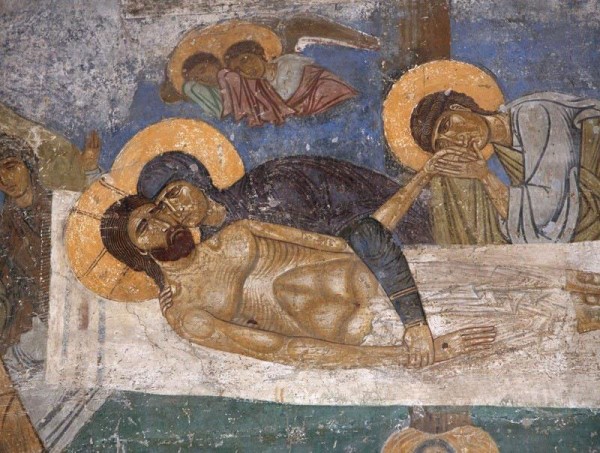 Can we imagine the grief and despair of love bereft of all hope? Christ was the most beautiful and sacred being in the lives of these people, but they know that death is irreversible; they know that nobody can overcome it and they have nothing to expect and to be afraid of: Nicodemus no longer conceals his faith in Christ. Joseph risks losing everything he has, and gives even his tomb to the Righteous One. They have nothing to hope for and to expect, their love is stronger than fear. Even if Christ is the purest and most sacred being they have ever seen in their lives, is dead, then I will go down into the grave unto my son mourning.

Today God’s overwhelming love toward man is revealed to us. But man’s love for God is no less striking and admirable, and the memorial of this love is the Holy Burial Shroud in which the body of the Lover of Mankind was wrapped, wrapped with the loving hands of weak and infirm people, but faithful in love even to hell.

The Chaste Adulteress: On Great Wednesday

You are fortunate if you find someone capable of understanding you and of sympathizing. In Christ, man finds…

The Eucharist as the Gift of Life: On Great Thursday

There really are such bitter days in man’s life when he does not have the strength to live.…