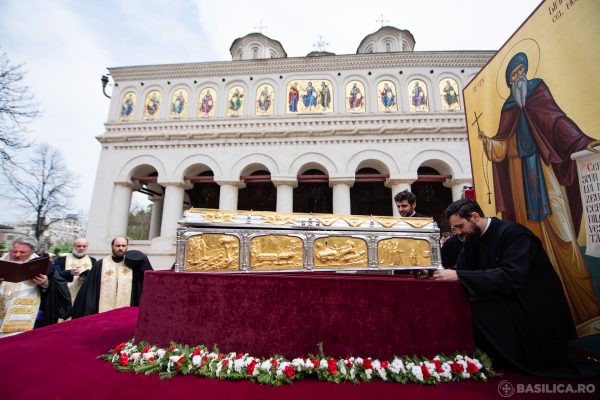 In a challenging context for Bucharest, severely affected by the spread of the SARS-CoV-2 virus, the pilgrimage dedicated to Saint Demetrius the New begins on Thursday, October 21, under exceptional conditions.

Being called the Protector of Bucharest, Saint Demetrius helped the Romanian Capital during the bubonic plague epidemic of 1813-1814 and the cholera epidemic of 1831.

“We can confess, in fear of God, that we have seen with our own eyes the miracles performed by this Saint. (…) In 1815, as this terrible epidemic was very widespread in the Capital, they took the Saint out and, after bypassing the Capital with him, seized him in the middle of the fair, where the water was consecrated, and prayers were read to the Saint. From that day, the epidemic began to decrease gradually, and the Capital got rid of that scourge,” reports Lt. col. Demetrios Papazoglou in “History of the founding of the city of Bucharest”.

This year, the pilgrimage will take place over seven days.

On Thursday, October 21, the relics of Saint Demetrius will be placed for veneration on the porch of the Patriarchal Cathedral, along with the relics of Saint John Jacob of Neamt, the Holy Emperors Constantine and Helen and Saint Nectarios of Aegina.

In the severe context of the pandemic, in which the Church itself carried out an intense campaign to promote and raise awareness of the hygienic-sanitary rules, emphasizing the naturalness and need to listen to doctors’ advice, to organize in real safety the feast of St. Demetrius the New, several special measures will be followed.

To respond to the desire of Romanian believers from all over the country and abroad to participate spiritually in the liturgical moments of the feast of Saint Demetrius the New, the Basilica Media Centre will broadcast the events of the Patriarchal Cathedral on all its channels.