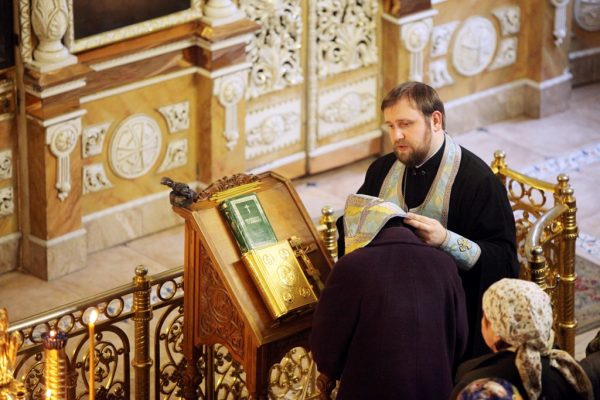 In an issue of the Road to Emmaus journal I read a wonderful interview with Fr. Artemy Vladimirov, a priest in Moscow, in which he spoke at length about the sacrament of confession. In it he spoke of the well-intentioned but ultimately false and unhelpful zeal of some confessors who felt “like the archangel with a burning sword guarding the entrance to paradise. If one of the descendants of Adam and Eve even dares to approach [the Chalice], he immediately raises his sword to annihilate them. Or I sometimes see a young priest,” continued Fr. Artemy, “standing near the cross and gospel like a guard dog: ‘Who dares to approach Holy Communion?’…For him the one aim is not to permit [their approach], as if he were a judge in a Dickens novel, or a KGB officer”.

Fr. Artemy of course speaks from his experience in the Church in Russia, which is in many ways different from the experience of the Church here in North America. But his concern that clergy deal compassionately with their flock is surely universally applicable. Clergy must be like sheep dogs, not guard dogs.

It is true that one aspect of the clerical office involves the stewardship of the sacramental Mysteries, which includes not giving them out indiscriminately. For the Orthodox, the Eucharist should only be administered to Orthodox Christians. Those not in the communion of the Church and those living in open and defiant sin should not be communed, however much this may hurt their feelings. In the case of the latter, hurt feelings are one of the purposes of this excommunication and denial of the Chalice: St. Paul speaks of a “godly grief which produces repentance” (2 Corinthians 7:9-11). But either way part of pastoral stewardship involves discernment regarding the administration of the Eucharist.

The problem comes when this necessary stewardship leads to an ungodly sense of power in the steward so that he delights in his control over his flock. He then becomes not a sheep dog, but a guard dog—and a dangerous and snapping guard dog at that. Sometimes it is necessary to excommunicate someone for a fault, either to induce repentance in the defiant or to therapeutically deal with the conscience of the sorrowful. But in either case the priestly steward acts for the salvation of his flock, and never forgets that he is there for no other purpose but to serve them. He must never delight in exclusion, as if his job were to limit communicants to an absolute minimum. His delight must be in his flock’s inclusion and their joy at the saving Chalice.

There is, of course, a danger in receiving the Eucharist too casually. But the answer is not to multiply conditions, and to insist upon all communicants first having jumped through the numerous hoops of confession, the saying of numerous canons and prayers, and a rigorous fast. All these things are good, but they are not conditions for reception, and it is not the job of the priest to act of policeman, judge, and jailor of the consciences of his flock.

In the early church, let us remind ourselves, no one went to confession and received absolution unless they had been formally excommunicated and were returning in penitence to the communion of the Church, so it is simply untrue that our Tradition requires confession as an absolute precondition before one can partake of the Eucharist. If a person is devout, penitent, and living the Christian life, their baptism is the only absolute precondition for partaking the Eucharist. (Obviously merely nominal or lapsed Christians require different pastoral handling, and it is here that confession may be fruitfully required.) Confession, prayer, and fasting are helpful disciplines, and should never be casually dispensed with. But they are disciplines, not preconditions—much less weapons in the hands of a priest which he uses to control his flock. In this regard Fr. Artemy mentioned advice given by an older priest of the Soviet era which contains a timeless wisdom: “Be afraid of not permitting someone to partake of Holy Communion!”

The priest’s task therefore is not primarily protection of the Eucharist from the faithful, but sanctification of the faithful through the Eucharist. Like a good sheep dog, he should lead his flock to the green pastures of the Lord’s Eucharistic sheepfold, not protecting the Eucharist from them, but protecting them from wolves. For certainly wolves abound in our society, trying to hungrily devour Christ’s rational sheep through their lies, temptations, and persecutions. Through his preaching the priestly sheepdog must warn his flock and forearm them against the wiles of the World. Like the Lord, he must wash the feet of his people, rejoicing in their victories and sorrowing over their sins like one invested personally in their salvation. And like St. John the apostle of love, he must say, “No greater joy can I have than this, to hear that my children follow the truth” (3 John 4). For on the Last Day, he will have to give an account for those children to the Lord, the Chief Shepherd. He laid down His life for that flock, and His under-shepherds the priests must do no less.