We hear people many times justifying a sin with a comment: but this is normal, it is in our nature to do so and so. It might be in our nature indeed, but in our fallen nature, not in the nature that God created, but in the nature that sin perverted. We should not confuse a distorted image, a tainted perception with the truth of things.
Fr. Vasile Tudora | 01 July 2010

There is no secret for any one that I am a passionate amateur photographer. As any other photo enthusiast I get caught up into the quest for the best resolution camera, the clearest, low dispersion, aspherical glass and all the other bells and whistles of photography; all this to make sure that I will be able to capture the best image possible at any given time.  My passion for capturing image is nothing particularly odd; on the contrary, I would argue, is a universal pursuit.

Man has a passion for images, for representations because he himself is an image, an image of God. So inherently we are searching for the image of the archetype, the image of the primordial model used for our creation: God Himself.

In the history of the Old Testament a number of biblical figures have been given a faded glimpse of God, but in a very subtle way.  Moses saw God in a burning bush (Exo3:3-5), Elijah perceived God as a “still small voice” (1Ki 19:12) and so forth; all of these visions were limited however. The limit was the capacity of man of perceiving divinity. Between the Almighty Creator and His creation there is an infinite gap that does not allow us to perceive Him in His entirety, no matter how much we try, no matter how many super tele-zooms we would employ. It is like a two dimensional being would try to perceive a third dimension: a square understanding a cube, a point reaching to a sphere.

More than this, after the fall from grace, man’s ability to sense God has been severely damaged once man’s mind was separated from his heart (nous), the only “organ” that could directly perceive God as He is. From that moment on, Man could only reach God through a rationality perverted by the fall and de-linked from God’s own. So when man tries to find God, he only perceives Him through a clouded lens, a glass with a lot of distortion, which misrepresents the true nature of things. 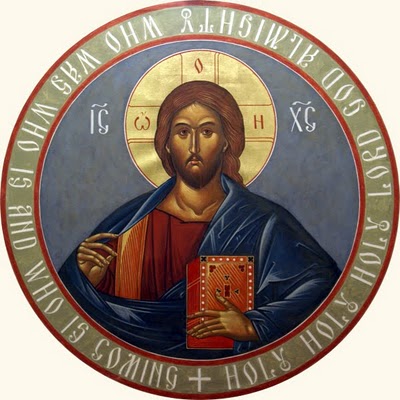 Because we see everything from this skewed perspective, we have reached an understanding of God, and of the world, that is far from the reality and the scope of the initial creation.  All the idolatrous religions have their roots in this misunderstood image of divinity. They are nothing but a reflection of the optical aberrations of the observers in the images of the idols they are worshipping; perverted depictions of gods made in man’s image, far away from the truth.

Not being able to perceive God as He is, but only as we think He is, deemed necessary that God would reveal  Himself to us by getting out of His supra-dimensional place and humbling Himself into our human dimension, taking flesh from the Virgin Mary and allowing us to experience Him on our own level.

This is the moment when the full revelation of God has been made to humanity. After Incarnation we do not perceive glimpses of God anymore through prophecies and eerie visions; we are now experiencing God in our midst, God and Man in the same time, Master and Brother in one.

This is the image that the Church is capturing in the iconography, the image of God incarnate, revealing Himself to us in His will to restore us to the ancient and natural state of our being. His teachings, His passion and Resurrection are making this change possible. He does not just came to fix something with a band aid, but He comes and refashions the very essence of man and recreates him into His glory, restoring in the same time his link to God, while also clearing in man’s line of vision into God’s reality.

The Church today, the living body of Christ, Who is the head of the Church, continues this mission, trying to reveal the true vision of creation to everyone willing. The building of the Church itself is a model of the entire world in its genuine state, as it was initially created.

We build churches in the traditional style not because we are not open to modern construction techniques, but because the Church space is a representation of this particular understanding of creation.

Looking at the different levels of the iconography of an Orthodox Church we see at the top level, on the main dome, the icon of Jesus Christ Pantokrator, ruling above everything, guarding the entire world in His providential care. Bellow, we see in the next level of iconography the Mother of God and the hosts of the angels serving God, praying at the footstool of His feet. The third level is the Church Triumphant, the icons of the saints, the people that lived and passed in the hope of resurrection, now rejoicing in grace. The fourth level is us, the faithful, the Militant Church, icons of God, completing the entire picture of creation.

All these icons are here with a purpose, not just for mere decoration; they represent the entire order of creation that participates in the worship: always along with us, fully engaged in the re-creation of the cosmos started by the Resurrection of Christ.

When we enter the church we leave the outside world behind us and we step into the Kingdom of God. Everything that falls out of this mystical reality is therefore deemed artificial and should be regarded with a critical eye because it can lead us astray from the right path. We hear people many times justifying a sin with a comment: but this is normal, it is in our nature to do so and so. It might be in our nature indeed, but in our fallen nature, not in the nature that God created, but in the nature that sin perverted. We should not confuse a distorted image, a tainted perception with the truth of things.

Being able to make this difference is the great gift of spiritual discernment that we should strive to achieve, to tell the genuine from the false in what concerns our spiritual life.

This vision of Communion of al the orders of creation explains why we cannot achieve anything on our own, separated from the Body of Christ, because only in Him and only together we can restore our original, un-fallen state.

We need to look at ourselves in the mirror of faith, under the grace of the Spirit and eliminate from our lives anything that perverts the image of God planted in us from the beginning. We need the Sacraments, we need the support of our brothers, we need to engage ourselves in the life of the Church, in this great restored vision of creation.

We cannot passively watch this happening from outside, but we need to get in, we have to actively pursue the cleaning of our souls only to realize that God’s image is not at the far end of a telescope, but right here, in our hearts, waiting to be uncovered.